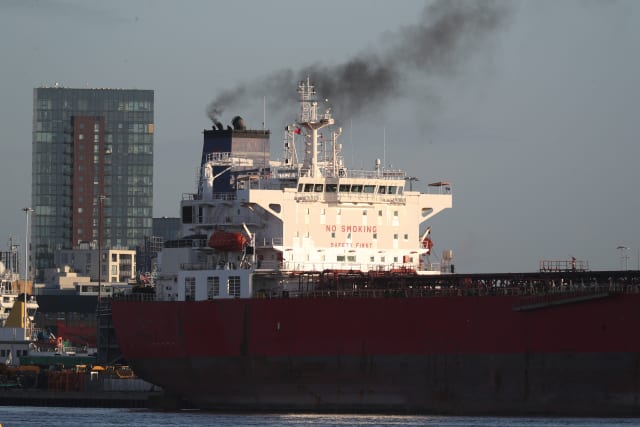 Seven Nigerian stowaways have been detained after British special services stormed an oil tanker off the Isle of Wight following a suspected hijacking.

The raid was carried out by around 16 members of the Special Boat Service (SBS), backed by airborne snipers, who secured the vessel in around nine minutes.

The operation was authorised by Defence Secretary Ben Wallace and Home Secretary Priti Patel on Sunday night after a tense 10-hour stand-off.

According to maritime tracking websites, the ship reached port in Southampton early on Monday morning.

Hampshire Police said the force was alerted to concerns over the welfare of the crew of the 228-metre long Nave Andromeda soon after 10am on Sunday as the ship headed towards Southampton, having set sail from Lagos in Nigeria.

The Ministry of Defence said: “In response to a police request, the Defence Secretary and Home Secretary authorised Armed Forces personnel to board a ship in the English Channel to safeguard life and secure a ship that was subject to suspected hijacking.

“Armed forces have gained control of the ship and seven individuals have been detained.

Hampshire police later said all 22 crew members of the tanker were safe.

The seven stowaways detained are understood to be Nigerian nationals who have been handed over to the force.

Bob Sanguinetti, chief executive of the UK Chamber of Shipping, said: “I think this has got all the hallmarks of a situation where a number of stowaways are seeking political asylum, presumably in the UK.

“At some stage they got aggressive.

“Clearly no one knew at the time how aggressive they were, whether they were armed or not, what their motives were, because there will have been confusion at that stage.

“In the discussions taking place between the ship’s captain and the authorities in the UK – both police and the military – they will have decided at some stage the least risky option was to board the vessel using the special forces as it turned out in the end.”

The SBS is the elite maritime counter-terrorism unit of the Royal Navy, with most of its personnel Royal Marine Commandos, whose operations are highly classified and not officially confirmed.

When stowaways ran amok on a cargo ship in the Thames Estuary in December 2018, the ship’s operator said they were detained after SBS personnel were airlifted onto the vessel.

On Sunday, four military helicopters – thought to have included two Merlin Mk 4s, a Wildcat and a Chinook – took 40 personnel to the scene of the suspected hijack aboard the Nave Andromeda and about 16 members of the SBS boarded the vessel.

“I commend the hard work of the armed forces and police to protect lives and secure the ship,” Mr Wallace said.

“In dark skies, and worsening weather, we should all be grateful for our brave personnel. People are safe tonight thanks to their efforts.”

Ms Patel said: “Tonight we are thankful for the quick and decisive action of our police and armed forces who were able to bring this situation under control, guaranteeing the safety of all those on board.”

Before the armed forces action, Hampshire Police said the vessel had been located around six miles off the coast of Bembridge on the Isle of Wight, adding: “It was reported that a number of stowaways were on board and they had made verbal threats towards the crew. No one has been reported injured.”

An exclusion zone with a three mile radius was placed around the vessel, with two coastguard helicopters spotted circling the ship in the afternoon.

Mr Sanguinetti said the stowaways are likely to have boarded the ship before it departed Nigeria but it is not yet known when they were discovered by the crew.

“It might have been entirely friendly for a number of days with the crew looking after the stowaways,” he said.

“But clearly, as the ship got closer to the UK, the stowaways got a bit more agitated and aggressive and that’s when the captain would’ve felt the crew of the ship were being threatened.”

He added: “I think what’s heartening from all of this is that the UK has sent a very, very clear message that ships and seafarers will not be allowed to get caught up in crises of asylum seekers or economic migrants.”