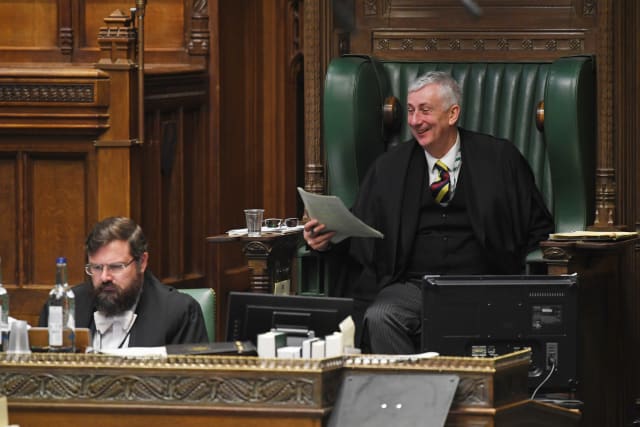 The Commons Speaker has called for a “nicer” Parliament after Labour’s deputy leader was reprimanded for calling a Conservative MP “scum” during a heated debated.

Sir Lindsay Hoyle said there is a need to ensure proceedings are civil but defended the adversarial layout of the House of Commons on the 70th anniversary of its refurbishment after it was damaged by Luftwaffe bombing during the Second World War.

Shaun Bailey told the Commons that his mother and staff had been targeted over the phone by people “using that type of wording”.

“It was a very overheated debate,” Sir Lindsay told Times Radio. “It was important that the debate continued, but you’ve got to take the heat out of it. And in fairness that did happen.

But Sir Lindsay defended the adversarial nature of the chamber, arguing that it “brings out the best” in politicians.

Critics of the two sides separated by a central aisle say such a layout encourages conflict and not consensus, with the more modern designs of the Welsh Senedd and Scottish and European parliaments deploying circular seating arrangements.

“I think it is pretty unique, isn’t it?” Sir Lindsay said of the Commons layout.

“You look at the European Parliament – magnificent for a modern building – but it’s nothing like the House of Commons chamber, is it?

“The House of Commons has got that real feel, hasn’t it? Let’s look into your eyes, let’s see what you’re really saying, let’s look at the meaning of this, and I think it brings out the best.”

Currently, just 50 MPs are allowed in the chamber in order to comply with social distancing rules due to the coronavirus pandemic.

The Speaker admitted that those limits have dampened proceedings and that he is looking forward to the return of packed debates with “electricity that fires from one side to the other”.

But he said there are positives to take away from Parliament’s changes during Covid-19, where MPs have been permitted to take place in debates remotely and vote electronically in a bid to limit the spread of transmission.

“I think some benefits of the voting by your pass reader is something I’d love to see for the future,” he said.

“I think what we will do is we will reflect on what’s been done, what’s worked, is this the right way to carry on?

“I believe it is where it was, with some extra technology within that.”