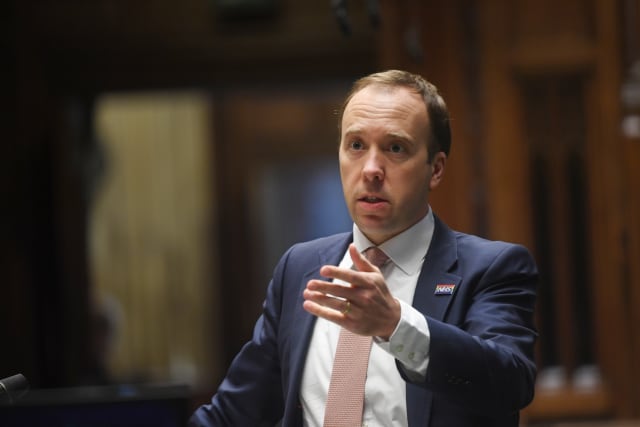 Hundreds of thousands more people are expected to be placed under the toughest coronavirus restrictions this week as ministers opened up on how areas could exit their lockdown measures.

Parts of Nottinghamshire look set to be the next to enter the highest Tier 3 alert level in England after discussions carried on through the weekend.

Local politicians have indicated that they expect the new measures could come into force as early as Wednesday.

The council in Warrington in Cheshire has already said it will be joining Tier 3 on Thursday, with Downing Street saying discussions are still “ongoing”.

It comes as Health Secretary Matt Hancock said areas would have to prove that their infection rate was “coming down”, especially among those aged 60 or over, before they could be removed from the strictest measures.

He has also refused to rule out bringing in a tougher set of Tier 4 impositions following reports another level is being considered to tackle England’s rise in infections.

Going into Tier 3 means pubs and bars have to close unless they serve meals while households are banned from mixing indoors or in private gardens and beer gardens.

Over the weekend, South Yorkshire became the latest region to come under the highest tier of controls following Liverpool City Region, Greater Manchester and Lancashire.

Asked about the criteria for an area to exit Tier 3, Mr Hancock told BBC Radio 4’s Today programme: “The first thing that’s most important is that the case rate has to be coming down, and in particular we look at the number of cases amongst the over-60s because that’s the number that is likely to translate into hospital admissions and sadly into deaths.”

Mr Hancock also suggested a vaccine would not provide an escape route from the social restrictions until next year.

Quizzed on Today about whether there would be some roll-out of a vaccine this year, he said: “Well, I don’t rule that out, but that is not my central expectation.

“The vaccine programme is progressing well.

“The leading candidates we’re in very close contact with.

“On my central expectation, I would expect the bulk of the roll-out to be in the first half of next year.”

The Government said a further 151 people had died within 28 days of testing positive for Covid-19 as of Sunday, bringing the UK total to 44,896, and there had been a further 19,790 lab-confirmed cases of coronavirus, bringing the total number in the UK to 873,800.

Amid the talks between councils and Government about escalating the tier levels in England, the Government has faced increasing criticism that the NHS Test and Trace service, which was supposed to be the key to controlling the disease, is failing.

Senior Conservative MP Sir Bernard Jenkin issued a call at the weekend for the head of the organisation – Tory peer Baroness Harding – to be sacked and replaced by a military commander.

He was backed by Labour which said that Lady Harding’s position had become “untenable” after the latest weekly figures showed fewer than 60% of the contacts of people testing positive for Covid-19 had been traced and told to self-isolate.

But Mr Hancock came to the Test and Trace tsar’s defence, telling BBC Breakfast she was “of course” the right person for the job.

However, it has emerged that officials on the Covid-19 taskforce are looking at the possibility of easing the rules for people ordered to self-isolate after coming into contact with someone who had tested positive for the disease because of low levels of stay-at-home compliance.

Ministers confirmed they were looking at reducing the time that people have to quarantine at home from 14 day to between 10 days and a week.

Scientists have publicly criticised the mooted change, arguing it would risk allowing infected people to mix with others.

Paul Hunter, professor of medicine at the University of East Anglia, told the Today programme: “Other things being equal, it would certainly increase the risk of transmission because the average incubation period for the disease is about five to six days, and only about 85-90% of people by seven days will have actually developed ill.

“So if you cut that incubation period what would happen is that 10, maybe 15%, of people who were infectious would ultimately (be) allowed to be back out in public.”

But Cabinet minister Mr Hancock pointed to France as an example of where a similar measure had been introduced.

He added: “So it isn’t about the compliance issue.

“It’s about the overall clinical judgment of what time is required for isolation.

“Obviously I’d rather have isolation as short as is reasonably possible because of the impact it has on people’s lives, but it must be safe.”

Meanwhile, the Welsh Government has said it will review a controversial ban on supermarkets selling non-essential items during a two-week “firebreak” lockdown which began on Friday.

Explaining the purpose of the review, Welsh Health Minister Vaughan Gething told Sky News: “We want the clarity on the principle that if there really are exceptional circumstances when someone needs what would otherwise be a non-essential item, that can happen as well.”