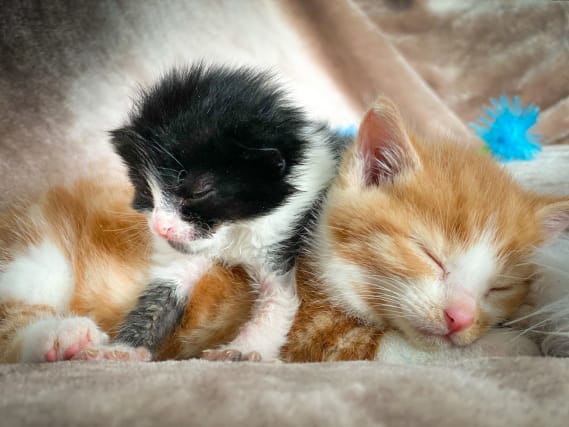 A kitten named after John Lennon when he was found on what would have been The Beatles star’s 80th birthday has adopted the role of big brother to a smaller cat called Ringo.

Ginger tabby Lennon was named by RSPCA inspector and Beatles fan Anthony Joynes after he was discovered by students on John Lennon Drive in Liverpool earlier this month.

The frightened cat was taken to the RSPCA Wirral and Chester branch to be cared for, and has since become inseparable from a tiny black and white kitten.

The purring pair became so close staff decided to name the smaller cat after Beatles bandmate and drummer Ringo Starr.

Ringo has been hand-reared by staff since he was rejected by his mother at birth but has found a big brother figure in Lennon.

Branch manager Kay Hawthorne said: “Ringo was rejected by his feral mum at birth and she had no milk so we had to hand-rear him from day one.

“At first, we would be feeding every two hours through the night so it was tiring but we are a dedicated team.

“We introduced him to Lennon when he arrived as we were helping feed them both and the pair just hit it off. Lennon is like an older brother and loves looking after Ringo.

“They play together and cuddle up together. They get on so well, it is really sweet.

“We just couldn’t resist naming the youngest Ringo when we could see he was getting on well with Lennon.”

Lennon, now about six weeks old, and Ringo, three weeks, might be rehomed together once they are old enough to leave the centre.

Ms Hawthorne said: “They both seem to be doing so well and are certainly getting by with a little help from their friends at the branch.”