‘It’s a godsend’: free meals for children across England as communities step up 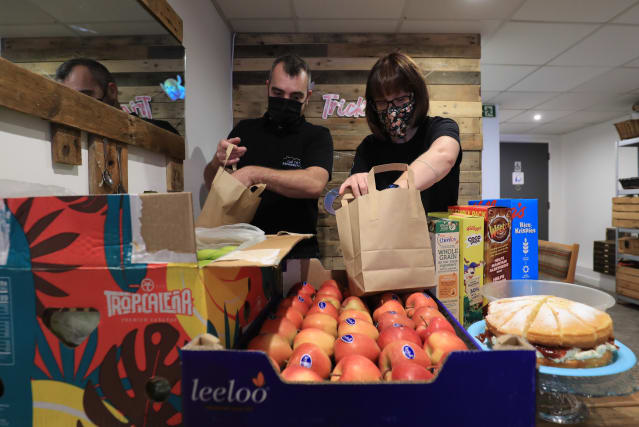 Cafe owners and restaurateurs across England are stepping up to provide tasty free meals for children over half term.

Businesses from all over the country have followed Marcus Rashford’s campaign on free school meals and are digging in to help.

A mother-of-three, one of many people already benefiting, said the support was a “godsend” after struggling during the pandemic.

It comes as the Government faces growing pressure to perform a second U-turn over the funding of free school meals in the holidays.

One business stepping up is Midland Mencap Community Centre in Weoley Castle, Birmingham which was given more than £1,000 in donations to buy food over the weekend.

Coming to collect a bag of food for the week, mother-of-three Aisha said: “It’s amazing. It’s a godsend actually, because I have been struggling.

“The vouchers over the summer helped so much.

“The Government has spent billions so how can they not now help children who are hungry?”

The 32-year-old, who has a three-year-old son and two daughters, aged 13 and 11, said: “I am usually really good with my budget.

“Their father, who I’m divorced from, usually pays for their uniforms but he got ill and he couldn’t work, so I bought them this time.

“But the £200 I used came from money I use to pay my bills, because the school said if I brought in the receipts I could get some help from them.

“I did that – but it’s been seven or eight weeks now, and I haven’t heard anything back from the school, so I’m struggling.”

Paul West, 58, owns Rumour cafe in Sheerness, Kent, and is offering free breakfasts for children over the holiday.

He told the PA news agency: “I just think generally as a local business I think we have a responsibility for our community because first of all it’s our community that pays our wages.”

Mr West, a grandfather, praised his staff and said the idea to provide the free meals came from manager Dawn Grain.

Mr West added: “We don’t want it to be a political thing; that’s not what it is for us, this is just us helping out.”

Kieron Wilson, an independent councillor in Bournemouth, Dorset, is making and delivering packed lunches for local children by himself over the school half-term.

“I worked out that I can make and deliver 40 lunches a day,” the 25-year-old told the PA news agency.

“The demand has now thankfully and rightly been covered by the council … which is really fantastic.”

Meanwhile in Liverpool, 100 packed lunches have been prepared at The Watering Can cafe in Greenbank Park on Monday morning.

Owner Keith Perryman said anyone in need could come into the cafe between 12pm and 2pm and any leftover meals would be taken to a local school which would help to distribute them.

He added: “If anyone is embarrassed about asking for free lunches we’ve come up with the codeword ‘Frank’, who is our dog, so if people ask for Frank we can provide them with the free lunches.”