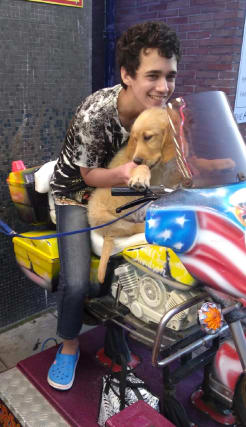 The parents of a 15-year-old boy have said they decided to donate his organs to help six people after his sudden death because their son “would always help people, no matter what”.

Nathan Howson, from Rotherham, died this summer following a bleed on his brain due to an undiagnosed condition.

As it became clear Nathan was not going to survive, his parents – Donna and Neil – faced a heartbreaking decision.

But Mrs Howson said: “It was very sudden but we knew there was nothing more the hospital could do.

“Neil and I didn’t even need to speak, we knew what to do.

“We now know people out there are living a better quality of life because of Nathan and our strength in giving that permission.

“We are proud that Nathan has been able to help other people and we wanted to help anyone we could.

“Nathan would always help people no matter what, so it felt right to donate everything we could.”

Mrs Howson said Nathan was a healthy teenager but became ill quickly with a headache before losing consciousness.

He was rushed to Sheffield Children’s Hospital but, despite emergency surgery and other medical treatment, the damage to Nathan’s brain was extensive and he did not survive.

His death was caused by a bleed resulting from an arteriovenous malformation (AVM), which is a tangle of blood vessels connected in an abnormal way.

Most people with an AVM, like Nathan, do not know until it bleeds.

His family said Nathan was a kind and thoughtful teenager who is described by friends as having a “heart of gold”.

He enjoyed gaming and spending time with his friends, and would help anyone with everything.

Mrs Howson said: “Everything was done with empathy and compassion. We could see the empathy in their faces even though they were wearing masks

“They were like angels dressed in blue who took him away.”

She said: “We want to encourage other people to talk about it and if they are in a similar difficult position, consider donating. We wouldn’t do anything differently and people are living a better life because of him.”

She said: “When families do find themselves in this position and they agree to donation we are always in awe of their selflessness in such a sad and terrible time for them.

“Nathan’s family personified this giving and generous nature by agreeing to organ donation despite their shock and grief.”

As well as receiving support from Sheffield Children’s, Nathan’s family were able to say a further goodbye and spend time with Nathan at Bluebell Wood Children’s Hospice in North Anston, South Yorkshire.

Mr and Mrs Howson, their son Adam and Nathan’s friends are now raising money for both Sheffield Children’s, through The Children’s Hospital Charity, and Bluebell Wood.