What are the five levels of new restrictions in Scotland? 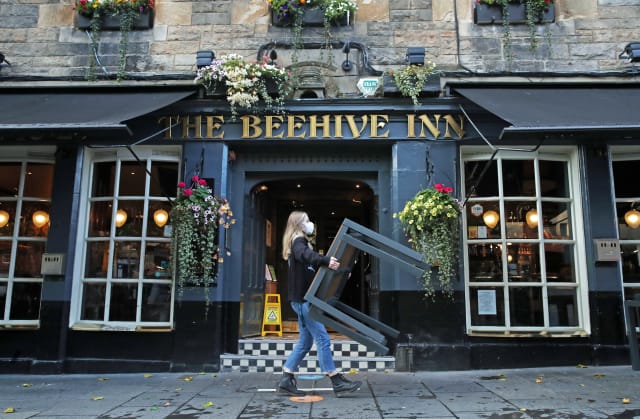 A new five-level strategy of lockdown measures for Scotland has been announced by Nicola Sturgeon as part of efforts to curb rising Covid-19 rates.

The First Minister announced the draft framework at the daily coronavirus briefing on Friday, saying it will allow the country to take a national approach where required or for it to be more locally-focused.

– How will the new system work?

Every part of the country will be placed into grades ranging from a baseline of Level 0 up to the highest Level 4.

The five levels represent an advancing scale of lockdown restrictions.

– What will happen in Level 0 areas?

Schools and most businesses will remain open, although pubs and restaurants may have a curfew.

Travel to areas in Levels 3-4 – as well as equivalent parts elsewhere in the UK – will be banned.

Ms Sturgeon said Level 0 will represent the closest to normal the country can get without effective treatment or a vaccine.

Life events such as weddings and funerals will be allowed with a maximum of 50 people in attendance.

This tier restricts meetings in homes and outdoors to six people from two households.

Life events will be reduced to a maximum of 20 people.

Only those who cannot work from home should go to their place of employment but schools will remain open with enhanced protective measures in place.

Different households will not be able to meet in each other’s homes.

Stadium gatherings and events will be banned, other than those which are drive-in.

Venues such as soft play centres, funfairs and theatres will be shut. Cinemas and amusement arcades will remain open.

Pubs will be allowed to open indoors as long as they serve a main meal.

Schools will remain open with enhanced protections in place.

Hospitality venues will not be allowed to serve alcohol indoors or outdoors, although food can be consumed on premises with potential time restrictions.

Entertainment premises will be closed.

People should avoid public transport and there should be no travel outside of the area, unless essential.

Additional protective measures may be in place for services such as hairdressers.

This will be much closer to the full lockdown restrictions seen from the end of March.

All non-essential businesses will be closed, including accommodation which is not work-related.

Public transport must not be used unless essential.

Places of worship will remain open but the limit will be reduced from 50 people to 20.

Weddings and civil partnerships will be limited to five people – six when there is an interpreter.

Construction and manufacturing will continue.

Schools will remain open with enhanced and targeted protective measures, including shielding children being told not to attend school premises.

The Scottish Government will continue to consult stakeholders about its five-level plan.

Holyrood will debate the framework next week before it is expected to come into force on Monday November 2.