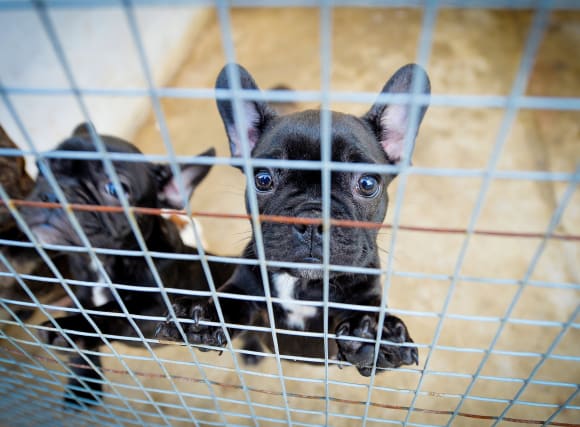 The maximum sentence for animal cruelty offences would increase 10-fold, from six months in prison to five years, under legislation supported by MPs.

Conservative Chris Loder (West Dorset) said he was inspired to sponsor the law change in England and Wales after a mistreated dog he found abandoned by a road became his family’s treasured pet.

She told MPs: “This Bill has the full support of the Government and we will do all we can to support its swift passage without amendment through the Commons and the Lords as soon as we possibly can.”

He said: “There is a correlation between animal cruelty and domestic violence.

“I’m told women in domestic violence shelters are 11 times more likely to report that a partner had hurt or killed a pet.”

Earlier, Mr Loder said: “I have decided to sponsor this important Bill, inspired by the story of my own dog, a four-year-old springer spaniel who I’ve named Poppy.

“Poppy was abandoned on a stormy night in January last year. She had been dumped at the top of a hill, miles from the nearest town or village, and it was at the roadside on that hilltop lane in my constituency that I found her whilst driving home.

“Poppy was in a bad state when I found her. She had clearly been mistreated: her pads were red raw, there were cuts to her leg, she had nasty growths and she needed three teeth removed – and evidence suggested that shortly before I found her she had given birth to a litter of puppies.

“My dad, being someone who has taken care of animals on our farm for his whole life, took her for the emergency veterinary care that she needed before bringing her home to live with my mum and dad on our farm.

“She now enjoys a wonderful new life as a member of the Loder family, enjoying the green and pleasant land of my home in West Dorset.

“This Bill amends the Animal Welfare Act 2006 which currently sets out a maximum penalty of six months imprisonment and/or unlimited fine for the most serious prevention of harm offences.”

He added: “A mere six months discourages no one, so we must establish in the law of England and Wales a much tougher maximum penalty.

“By increasing the penalty 10-fold, we hope to suitably discourage the shocking behaviour that leads to the neglect and cruelty of animals.”

“How is it right that a person in this country can maim, torture and murder a pet and only receive a maximum sentence of six months?

“Too often those charged with the most violent animal welfare offences do not even receive a custodial sentence.”

Tory Sarah Atherton (Wrexham) gave a warning about the increasing number of dog and cat adoptions during the pandemic.

Ms Atherton told MPs: “Preparing for today I spoke to vets in my constituency of Wrexham. They tell me they are currently concerned about what is termed as ‘Covid pups’ – and I take the opportunity to highlight, on their behalf, a dog is for life, not just for a lockdown.

“My local vets have raised concerns about dogs purchased since March.

“These pets have not had the opportunity to be raised and socialised in the wider community, but in a solitary household.

“Let’s hope we don’t see an increase in abuse and abandonment of pets due to possible behavioural problems or the cost of looking after pets as Covid restrictions continue.”

The Bill will undergo further scrutiny at a later date.