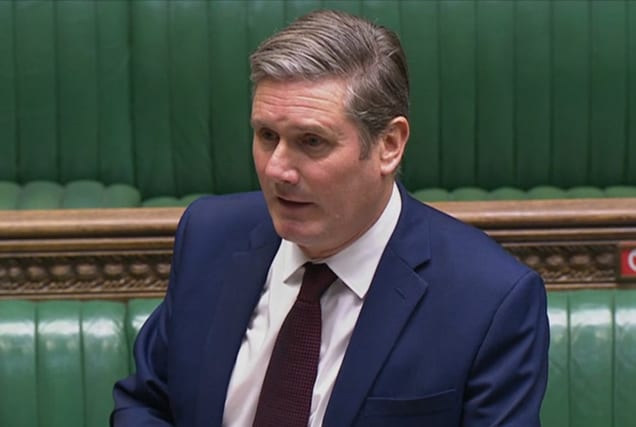 Sir Keir Starmer has defended his party’s position on a controversial Bill which would allow undercover agents to break the law.

The Labour leader ordered his MPs to abstain on the third reading of the Covert Human Intelligence Sources (CHIS) Bill, also known as the “spy cops Bill”.

However, 34 of them, including former leader Jeremy Corbyn and shadow chancellor John McDonnell defied the whip and voted against the legislation which human rights groups have said would allow undercover officers to rape, murder and torture in the name of national security.

In a Call Keir event held with voters from Glasgow, Sir Keir was challenged on the party’s abstention by student Jarrod Grant.

Mr Grant claimed the Bill “blatantly breaks human rights”, asking why Labour was not taking a “hard stance on what is essentially allowing police and undercover agencies to violate human rights”.

The Labour leader said “there is no bigger advocate for human rights” than him, and told Mr Grant that any powers authorised for use by undercover agents would have to comply with the Human Rights Act.

He said: “On the face of this Bill, there is a clear requirement that says nothing can be authorised if it conflicts with or breaches the Human Rights Act.

“If you can’t authorise something that would breach the Human Rights Act, how on earth can you make the argument that you can break human rights under this Bill?

“You’re not allowed to sign an authorisation if what you’re authorising will break the Human Rights Act.

“So this argument that you could sign off torture, murder and rape is just wrong.”

The Labour leader claimed it was “impossible” to argue that the Bill would allow undercover agents to torture people, adding: “It just doesn’t make any sense at all.”

Sir Keir said 27 terrorist plots had been uncovered in the last three years, adding: “This is real life, and if you don’t have undercover agents in these organisations, you will never uncover these plots and lots of people will die.”

He also said the argument that the powers given to the police and security services in the Bill are not needed is “wrong”.

He claimed the Bill would increase the transparency of powers already available to undercover agents.

He said: “I’m a strong believer that if the state has powers – undercover agents, police officers, I don’t really mind – they should be on the face of legislation, not hidden in the shadows.

“Opposing this Bill means, do you get rid of these powers? No, they just get hidden in the shadows with no tribunal you can go to and no commission.

“All my life I’ve believed that if the state is going to have power it should be on the face of legislation so everybody can see what it is and what the issues are.”