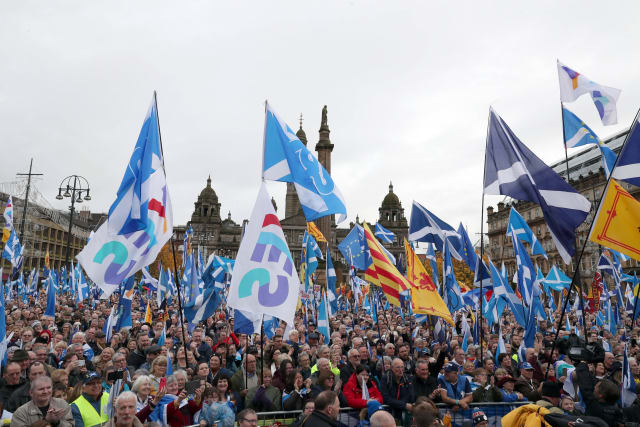 Labour leader Sir Keir Starmer has said he cannot deny a recent increase in support for Scottish independence, but he believes coronavirus should take priority over another referendum.

Support for independence has steadily increased in recent months since polls in June found it was more popular than staying in the union for the first time.

The surge culminated last week when an Ipsos Mori survey for STV found 58% of people asked were in support of leaving the UK.

In a “Call Keir” event held with voters in Glasgow, the Labour leader said the Scottish Government’s focus should be on the pandemic.

On rising support for independence, he said: “There’s no point in me contending that doesn’t broadly reflect where a lot of people are in Scotland, I don’t think that’s a credible position to take.”

Sir Keir said a number of other polls had shown independence is not a priority for people in Scotland, with tackling the pandemic and the economic recovery being foremost in people’s minds.

A Survation poll in September of 1,008 Scots found fewer than one third had independence as a top priority.

He said: “I think that feeds into an argument that, in the middle of a pandemic, it really isn’t the time to be having a discussion about independence, it’s the time to be working through how we’re going to respond to the pandemic.”

Last week’s poll showed Scottish Labour’s support was at 13% in the constituency and list votes, with the party remaining in third position.

The Labour leader said he is working with colleagues north of the border “every week” in preparation for next year’s Holyrood election.

Sir Keir’s intervention comes days after Scottish Constitution Secretary Mike Russell said another independence referendum could be held as early as the latter part of next year.

The Scottish Government has pledged to publish a draft Bill before the May election outlining the timescale and question for another vote.

Mr Russell told the BBC on Wednesday: “If the Scottish people endorse (the draft Bill at the election) and wish it to happen, then it must happen, and we’re not going to do anything other than assume that it will happen in those circumstances – if the Scottish people speak then they have to be heard and there will have to be a referendum.

“That could take place, I’m sure, before the end of next year.”