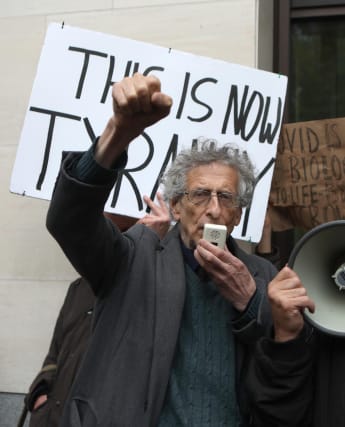 Piers Corbyn was “specifically targeted” by police at anti-lockdown protests and there was a “politicisation in the enforcement of the regulations”, his barrister has told a court.

The 73-year-old weather forecaster was “very much on the radar” of officers patrolling London’s Hyde Park in May, Ben Cooper QC told Westminster Magistrates’ Court on Friday.

Corbyn, the elder brother of former Labour leader Jeremy Corbyn, denies breaching coronavirus rules during two protests at the park on May 16 and 30.

He was due to stand trial on Friday but issues with late disclosure of police log books delayed proceedings.

District Judge Sam Goozee indicated his impatience with lawyers, telling them: “These issues should have been dealt with between June and today” as he ordered the disclosure of a bronze log book from May 30.

A new trial date for November 27 was set at the same court.

Sketching out the defence case, Mr Cooper referenced Black Lives Matter protests on May 30, going on to say there were “no arrests taking place at other protests”.

He told the court: “This demonstrates there is a politicisation in the enforcement of the regulations by choosing to permit one set of demonstrators to protest while at the same time discriminating against different groups on the same day.”

Corbyn, who wore a dark blue shirt and tie, was applauded as he arrived at the court, and was supported in the at-capacity public gallery by around 10 people who handed out flyers to the press.

The activist appeared to nod off several times during the afternoon session, and was told off by the judge after his phone rang out several times and for conversing with his supporters during lulls in proceedings.

Corbyn, of East Street, Southwark, south London, denies two counts of participating in a gathering in public of more than two people in England during the coronavirus emergency period relating to protests on May 16 and 30.

Speaking outside court on Friday morning, he told reporters: “If we win today, this will set a precedent for all other people arrested under the Covid regulations.

“If we lose, we will appeal.

“Whatever happens, if they impose a fine, I will not pay the fine.

“I’m not going to pay any fines for these anti-just, illegal laws.”

He also indicated there would be “another drink against the curfew” organised for Friday night “in a place as yet unrealised”.

He told reporters: “We’re going to have another drink against the curfew – where allegedly someone’s going to be blowing fire.”

When someone asked if the apparent fire-breather would be himself, he replied: “Well, it could be me, let’s see.

“And also there’s going to be someone juggling, so it will be a bit of fun.”

Jeffrey Wyatt, 56, of Watery Lane, Milton Keynes, also appeared at court representing himself, charged with participating in a gathering in public of more than two people by attending the same protest on May 16.

A previous judge had joined his trial to Corbyn’s in July, but District Judge Goozee severed the joinder because there are “different issues” between the cases, including different police officers being called to give evidence, and Wyatt wanting to call “expert on common law” as a witness, the court heard.

He is due to stand trial on February 8.