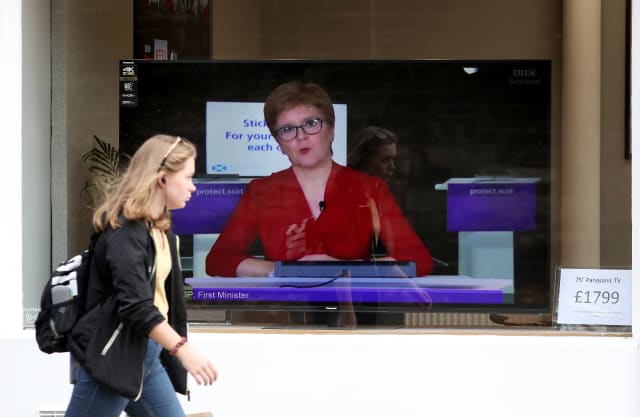 Nicola Sturgeon has set out a five-tier plan of measures for dealing with the coronavirus pandemic in Scotland.

The new set of restrictions has been anticipated since a similar three-tiered system was introduced in England by Prime Minister Boris Johnson.

If approved at Holyrood next week, the new measures will come into force in Scotland on Monday November 2.

The Scottish First Minister outlined the new system at her daily coronavirus briefing on Friday.

She said the changes are required to help Scotland live with coronavirus, and can apply to specific council areas or nationwide if necessary.

That means areas with lower levels of the virus do not require to be under the same restrictions as areas with higher infection rates, she said.

Scotland has recorded 18 coronavirus deaths and 1,401 positive cases in the past 24 hours, Ms Sturgeon said, but she added the infection rate appears to be slowing.

The five levels range from zero, which the First Minister said would be as close to normal as the country can be without effective treatment or a vaccine, to the highest level of four which is “closer to a full lockdown”.

Schools are expected to be kept open throughout all levels, with necessary safety measures in place, while all hospitality venues, except hotels, will close in Level 4.

Ms Sturgeon said: “Level 0 is broadly comparable to the position we reached in August when the virus was very supressed in Scotland but still a threat.

“At this level we would be able to meet indoors with eight people from three households and most businesses would be open, albeit with safety measures in place.

“Level 1 sees slightly more restrictions, household meetings would reduce to six people from two households but there would still be a reasonable degree of normality overall.

“Levels 2 and 3 are intended to apply at times such as now when transmission is higher and rising.

“Level 2 entails restrictions broadly similar to those currently in place just now outside the central belt, so limitations on hospitality and no gatherings inside people’s homes.

“Level 3 is broadly similar to the tougher restrictions which currently apply across the central belt, with much of hospitality being closed completely.

“There are however some key differences, for example we envisage restaurants being able to be open at least partially in Level 3.”

She said levels 2 and 3 would be intended to apply for relatively short periods of time to bring transmission under control.

She added: “Level 4, the highest level, which of course we would not use unless absolutely necessary, would apply when transmission rates are, or are threatening to become, very high with corresponding pressure on the NHS and perhaps the risk of the NHS being overwhelmed.

“The restrictions at Level 4 are closer to a full lockdown, for example non-essential shops would have to close.

“However even under Level 4 restrictions, six people from up two households could still meet outdoors, there would be no limit on outdoor exercise for individuals, and we would seek to keep manufacturing and construction businesses open, albeit with safety measures in place.

“We do not envisage returning to a situation as severe as the first lockdown imposed back in late March.”

She stressed Scotland is “not back at square one”, and the framework is intended to build on the progress made in tackling the virus.

The levels will be reviewed on a weekly basis, the First Minister said.

Earlier this month, temporary restrictions were brought in across Scotland and although they were initially set to end on October 25, these have now been extended until the new tiered system comes into effect.

Since October 9, bars and restaurants in five health board areas – Greater Glasgow and Clyde, Lanarkshire, Ayrshire and Arran, Lothian, and Forth Valley – have been forced to close for all but takeaways.