It is fair supermarkets only sell essentials during firebreak, says Drakeford 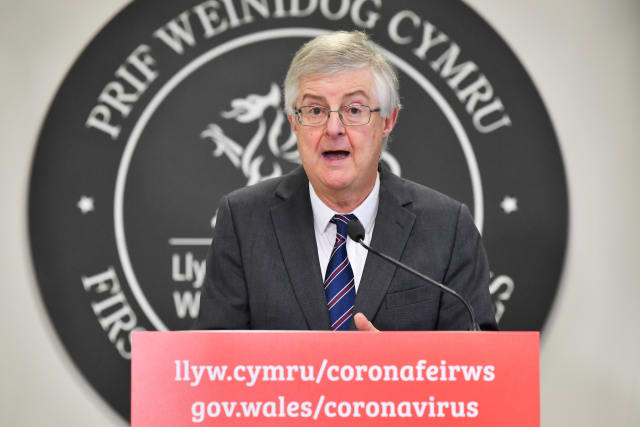 First Minister Mark Drakeford has described stopping supermarkets from selling non-essential products during the firebreak lockdown as “a straightforward matter of fairness”.

Mr Drakeford said the Welsh Government had been clear that non-essential retail would close during the 17-day period, which begins at 6pm on Friday.

He told a press conference in Cardiff that any suggestion that the ban, which was announced on Thursday, was based on his own politics was “nonsensical”.

The Welsh Conservatives called for urgent clarity on what items are considered to be essential, while supermarkets said staff were working hard to comply with the restriction.

On Friday afternoon, the Welsh Government issued guidance stating that certain sections or aisles of large supermarkets or department stores “must be cordoned off or emptied, and closed to the public”.

These include areas selling electrical goods, telephones, clothes, toys and games, and products for the garden, as well as a dedicated section for homeware products.

Supplies for the “essential upkeep, maintenance and functioning of the household” – such as batteries, lightbulbs and rubber gloves – can be sold during the lockdown.

Shops will be expected to use their “best endeavours” to consider what should be available in cases where there may be doubt as to whether a product is essential, the guidance states.

Mr Drakeford said: “We are requiring many hundreds of small businesses to close on the high street right across Wales.

“We cannot do that and then allow supermarkets to sell goods that those people are unable to sell.

“And we are looking to minimise the amount of time that people spend out of their homes during this two-week period.

“This is not the time to be browsing around supermarkets looking for non-essential goods.”

Mr Drakeford said trying to find exceptions to the rules was “just the wrong” approach and called on people in Wales to not use the firebreak to do things that they do not have to.

“It is a straightforward matter of fairness – we are in this together here in Wales,” Mr Drakeford said.

From 6pm, all leisure and non-essential retail will be closed including: clothes shops, furniture stores and car dealerships.

Shops allowed to remain open include supermarkets and other food retailers, pharmacies, banks and post offices.

Under the law, firms conducting a business that provides a mixed set of services will be allowed to open if they cease conducting the service that must close.

Mr Drakeford said it would be “immediately apparent” to people in a supermarket that non-essential areas would not be open for trading.

He told the press conference that friends and neighbours were often “very willing to help” people if they could not find items they needed, or they could shop online.

Darren Millar, from the Welsh Conservatives, said confusion about the ban was “rife” shortly before the lockdown began.

“Supermarkets, convenience stores and other shops have no idea which goods the Welsh Labour-led Government regards as non-essential so that they can restrict them from sale,” Mr Millar said.

A Sainsbury’s spokesman said staff had been working “around the clock” to put the necessary changes in place.

“We’re focused on providing our customers with food and other essential items, in line with government guidance,” he said.

Waitrose told PA that it was reviewing the Welsh Government’s guidance and “working through what this means for our business”.

Asda confirmed the regulations meant that only products deemed essential could be sold during the lockdown.

“We have been given very little time to implement these changes or clarity on what is deemed ‘essential’,” a spokesman said.

“We have expressed our deep concerns about the implications for customers accessing products they genuinely need and the risk to our colleagues safety.”