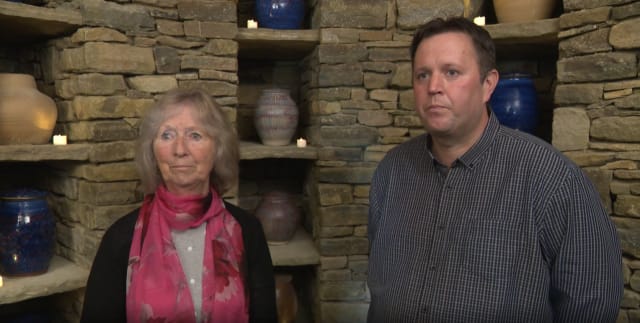 A mother and son from Dorset have opened a traditional barrow-style tomb to house thousands of urns.

Jo Vassie and Tom Vassie opened the tomb, made from local Dorset stone, for families to use “forever”.

“The barrow itself is constructed of Purbeck stone sourced from Swanage in Dorset,” Mr Vassie said.

“The purpose of the barrow is for urns to go in, as we see here, with ashes in, and we’ve got availability for up to 2,500 sets of ashes spread over the 990 niches that are available to people.”

“In one simple word they would get it forever, we are not selling these on a leasehold, we didn’t want to do that at all,” Mrs Vassie said.

“People want to place somebody’s ashes to rest, they don’t want to think in 50 years time: Oh dear, we’ve now got to pay again, or take grandma out, or something like that.”

Mrs Vassie said the “stillness” and “quiet” of the traditional tomb is “something that is lacking in the world today”.

In the UK, barrows were in widespread use for burying the dead from around 2900 BC to 800 BC. Now, the Vassie family’s barrow is one of only a handful in the country.