Coronavirus infections double in a fortnight but ‘growth may be slowing’ 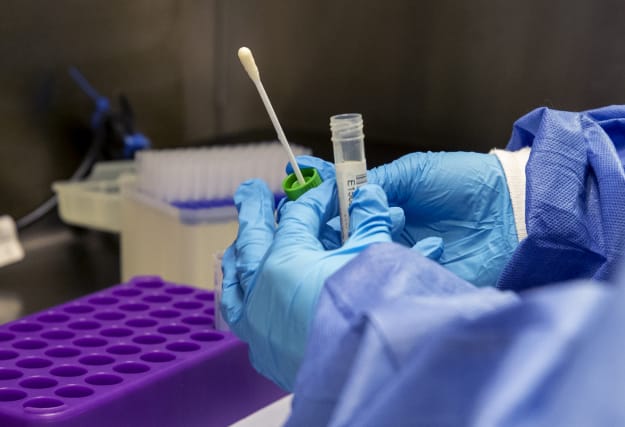 The number of new daily coronavirus cases across England has doubled in a fortnight but the rate of growth may be slowing down, data suggests.

Figures from the Office for National Statistics (ONS) infection survey estimates there was an average of 35,200 new cases per day of Covid-19 in the community in England between October 10 and 16.

The ONS said the rate of new infections “has continued to increase” in recent weeks though experts suggested the growth may have slowed down.

The data does not include people staying in hospitals, care homes or other institutional settings.

According to the ONS, an estimated 433,300 people in England had coronavirus during the most recent week, equating to around one in 130 people.

It said: “There has been growth in Covid-19 infection rates in all age groups over the past two weeks including those aged over 70, with the current rates highest in older teenagers and young adults.

“The highest Covid-19 infection rates continue to be seen in the North West, Yorkshire and the Humber, and the North East.”

Professor James Naismith, from the University of Oxford, said the most recent figures – looking at the increase from 27,900 to 35,200 cases per day – suggest the rate of growth of the epidemic may be slowing down.

“If so, and I emphasise there are uncertainties, this is a hopeful sign that the rate of increase is slowing down.”

He said the figures were “hopeful” but added that it was “too early to draw firm conclusions”.

“Testing identified less than half the people who got infected in the week ending October 14.

“This is a disease which is asymptomatic for the majority and rapidly spread. It is very hard to track and trace.”

It comes as the Scientific Advisory Group for Emergencies (Sage), which advises the Government, said the reproduction number, or R value, of coronavirus transmission for the whole of the UK has nudged down to between 1.2 and 1.4.

Sage said there “is still widespread growth of the epidemic across the country”.

According to the ONS data, 16,700 people in Wales were estimated to have had Covid-19 in the most recent week, equating to one in 180 people.

This compares to around one in 100 people in Northern Ireland and one in 180 in Scotland.

“Within England, whilst young adults and older teenagers continue to have the highest levels of infections, there are increases in all age groups including the over 70.”

The ONS noted small reductions in the percentage of people testing positive for antibodies, which it said “could suggest evidence of antibody waning at the population level”.

However it said it was “too early to say this with certainty” and more work would be carried out.

In England, an estimated 5.6% of people have tested positive for antibodies against Covid-19 in a blood test in September.

Separate data from the Covid Symptom study app suggests there were more than 36,000 new daily cases in the UK over the two weeks to 18 October – up from nearly 28,000 the previous week.

The figures are based on app users logging their symptoms and whether they have had a positive test result.