Business grants will run out without boost from UK Government, warns Sturgeon 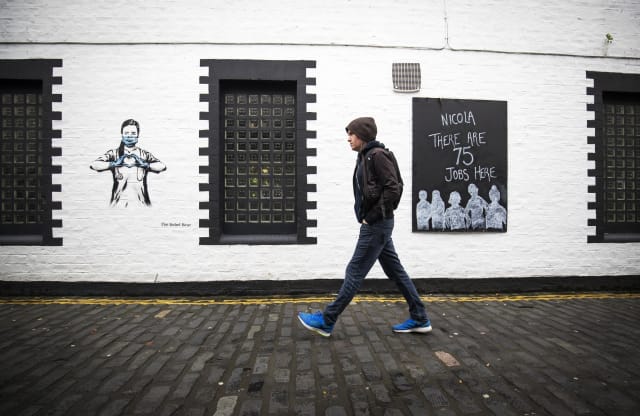 Money to help businesses cope with coronavirus restrictions will “run out” in Scotland unless the UK Government takes further action, Nicola Sturgeon has warned.

The First Minister announced grants of up to £3,000 every four weeks for businesses legally required to close under Covid-19 restrictions, while those able to remain open but are unable to trade normally will be eligible for up to £2,100 depending on rateable value.

The grants, which will apply from November 2 when a new five-level restriction framework is expected to come into force, are in addition to the UK Government’s revised furlough scheme which launches the day before.

She added: “The Chancellor’s commitment for England was open ended – he will pay whatever the demand from businesses is for as long as necessary. I think that is right and proper.

“He is able to do that because he can borrow the money to pay for it. The Scottish Government can’t do that so we have to rely on the Chancellor to provide the same funding guarantees for Scottish businesses as he already has for those in England.

“So far that hasn’t been done, not a single penny of extra funding beyond that already allocated has been guaranteed for Scotland as a result of yesterday’s announcement.

“While I am not prepared to offer businesses here less funding than their counterparts in England will get, I have to be clear on this point.

“Without a resolution to the problem I have just highlighted, the money the Scottish Government has to pay for these grants will eventually run out.

“It is not possible to fund indefinitely demand-led commitments out of a finite budget with no powers to borrow.

“That is why we need a resolution and the Scottish Government will be pressing for that resolution as quickly as possible.”

Based on rateable value, businesses required to close by law will be eligible for a grant of either £2,000 or £3,000 for every four weeks measures are in place.

Business which can remain open but have to modify their operations will qualify for a hardship grant of either £1,400 or £2,100, depending on rateable value.

The Scottish Government’s draft framework document states the grants will be provided “regardless of level” in fortnightly instalments, subject to discussion with councils.

It continues: “With the limited financial and economic levers at our disposal, we will not be able to protect every business; and financial support cannot replace all lost income or save every job.”