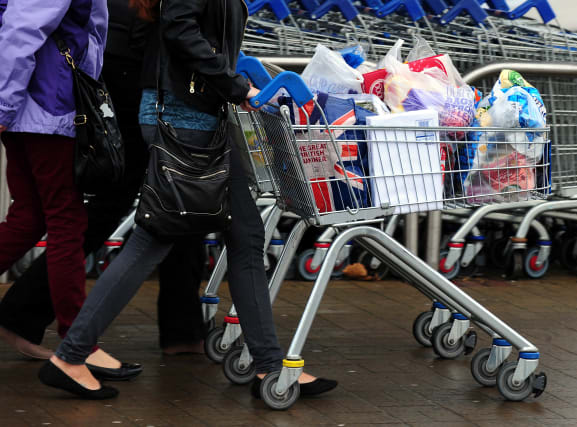 Supermarkets in Wales will not be allowed to sell items such as clothing and hardware during the Covid-19 firebreak lockdown, First Minister Mark Drakeford has said.

Mr Drakeford said it will be “made clear” to supermarkets they are only able to sell products that are classed as “essential goods”.

He said this would ensure a “level playing field” as many retailers will be forced to shut when the 17-day lockdown begins on Friday.

Shops selling food, off-licences and pharmacies can stay open but the likes of clothes stores will have to close.

Mr Drakeford made the announcement at a Senedd committee in response to a question from Conservative MS Russell George who said it was “unfair” to force independent clothing and hardware retailers to close while similar goods were on sale in major supermarkets.

“In the first set of restrictions people were reasonably understanding of the fact that supermarkets didn’t close all the things that they may have needed to,” Mr Drakeford said.

“I don’t think that people will be as understanding this time and we will be making it clear to supermarkets that they are only able to open those parts of their business that provide essential goods to people and that will not include some of the things that Russell George mentioned which other people are prevented from selling.

“So, we will make sure there is a more level playing field in those next two weeks.”

From Friday all leisure and non-essential retail will be closed and this includes clothes shops, furniture shops and car dealerships. A complete list is yet to be published.

Shops allowed to remain open include supermarkets and other food retailers, pharmacies, banks and post offices.

Under the law, firms conducting a business that provides a mixed set of services will be allowed to open if they cease conducting the service that must close.

Mr George said: “It is deeply concerning that, given we are days away from the lockdown, we are still awaiting the publication of a full list of the types of businesses required to close, as well as guidance on business closures.

“At a time of considerable uncertainty, it is totally unacceptable – whether intentionally or not – to create even more concern and anxiety, which is, sadly, what this Government is succeeding at.

“The people and businesses of Wales deserve better than being left in the dark. For the sake of people’s jobs and livelihoods, I urge the Welsh Labour-led Government to heed our calls and publish a list, without delay.”

Andrew RT Davies, the Conservative shadow health minister, tweeted: “The power is going to their heads.”

He later added: “Is a flagon of Strongbow deemed essential? What about some much-needed underpants if you’re caught short?

“I do hope there is some published guidance on what the Labour commissars deem as essential.”

Sue Davies, from consumer group Which?, said the announcement would cause “confusion”, particularly among the vulnerable.

“Our own research showed that almost half of those who described themselves as situationally vulnerable in Wales during the previous lockdown had difficulty accessing the food and groceries they needed,” she said.

“The Welsh Government must act now to clarify the situation around what retailers can and cannot sell, and must urgently identify those most in need to give them the support to ensure that no-one who is at risk struggles to access the food and other basics they need.”

Johnny Williams urges patience as Wales builds for the future