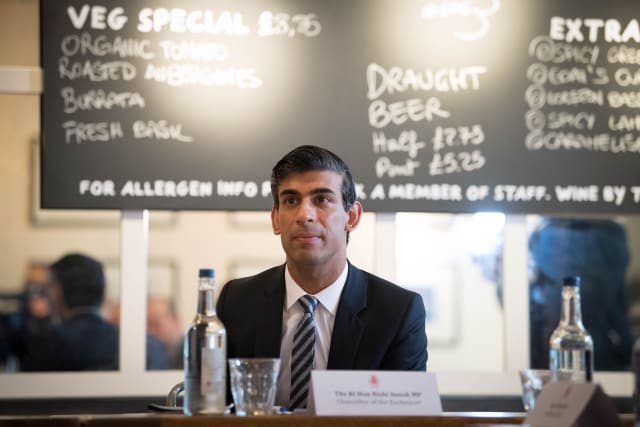 Rishi Sunak has announced an emergency multi-billion pound bailout aimed at supporting workers and firms through the second coronavirus wave.

The Job Support Scheme, which replaces the current furlough system from November 1, will be made more generous in an effort to persuade firms to keep staff in work.

There will also be grants of up to £2,100 a month available for firms in Tier 2 areas of England, primarily aimed at helping hospitality and leisure venues which have seen takings plummet due to restrictions on households mixing.

The package, which could cost the Exchequer around £13 billion over six months, came as there were further signs of trouble in the £12 billion NHS Test and Trace system.

A total of 101,494 people tested positive for Covid-19 in England at least once in the week to October 14, according to the latest Test and Trace figures, the highest weekly figure since the system was launched in late May.

But just 59.6% of close contacts of people who tested positive were reached through the Test and Trace system, its worst performance yet.

The rising number of cases also led to Stoke-on-Trent, Coventry and Slough being moved into Tier 2 from Saturday, while talks are taking place between the Government and Warrington, West Yorkshire and Nottinghamshire about the toughest Tier 3 restrictions.

Mr Sunak’s package of extra support, announced just days after London was moved into Tier 2, provoked fury from northern politicians who have seen their economies suffer due to long-standing coronavirus curbs.

In an effort to address that criticism, Mr Sunak said the business grants will be available retrospectively for areas which have already been subject to restrictions since August, and come on top of higher levels of additional business support for areas moving into Tier 3.

Around 150,000 businesses in England could be eligible, the Treasury said, at a potential cost of more than £1 billion.

The changes to the Job Support Scheme will apply across the country and could cost the Exchequer £6 billion if two million people take up the offer for the entire six months of the scheme.

Instead of only being open to people in “viable” jobs working a third of their normal hours, it will now cover employees doing just 20% of their usual work who will receive at least 73% of their usual pay.

The amount that employers are required to pay to top up their wages has also been reduced to just 5% of unworked hours, down from 33%.

Extra help for the self-employed will see the amount covered by grants increase from 20% of profits to 40%, meaning the maximum payout will increase from £1,875 to £3,750.

This will amount to a potential further £3.1 billion of support to the self-employed through November to January, with a further grant to follow covering February to April.

Explaining why he has been forced to introduce extra measures just weeks after setting out his winter economy plan, Mr Sunak told MPs that even businesses which can stay open are facing “profound economic uncertainty”.

The Chancellor said hospitality industry chiefs have given a clear message that “the impact of the health restrictions on their businesses is worse than they hoped”.

In an indication of the continuing problems in northern England:

– Prime Minister Boris Johnson told a business conference: “I have to be honest with you, this winter is not going to be easy but I am certain that the people of northern England will confront this crisis with the fortitude and selflessness we have seen throughout.”

– Hospitals in Liverpool are treating more coronavirus patients than they were during the peak of the first wave of the pandemic, Dr Tristan Cope, medical director of Liverpool University Hospitals NHS Trust, said as he warned that numbers were continuing to rise.

– Medics at Whiston Hospital in Knowsley, a Merseyside borough which has seen some of the highest infection rates in the country, said they are exhausted and disheartened to see people ignoring the rules.

In the Commons, Mr Sunak acknowledged the strain the second wave of the virus had placed on communities living under coronavirus curbs and warned of “difficult days and weeks ahead”.

“I understand your frustration, people need to know this is not forever.

“These are temporary restrictions to help control the spread of the virus,” he said.

Shadow chancellor Anneliese Dodds branded Mr Sunak’s announcements “a patchwork of poor ideas rushed out at the last minute” and questioned why “this is the right thing to do now, but wasn’t when parts of the North and Midlands” were put under restrictions months ago.

Greater Manchester Mayor Andy Burnham, who was involved in a bitter wrangle with the Government over his region’s move to Tier 3, questioned the timing of the move, saying: “Why on Earth was this not put on the table on Tuesday to reach an agreement with us?”