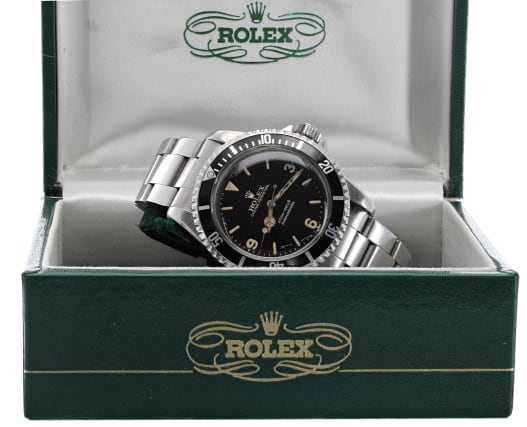 A rare Rolex watch once owned by a miner has sold for more than £200,000 at auction.

The Rolex Submariner 5512, with an exceptionally rare “3-6-9” dial, was bought for £70 in 1964 by its original owner – a medical attendant at the former Shirebrook Colliery in Mansfield – to celebrate his 40th birthday.

The watch sold for £210,000 at Gardiner Houlgate auctioneers in Corsham, Wiltshire, to a Hong Kong-based collector.

“The late owner’s family are naturally delighted as this was a very sentimental piece. They told us this type of thing never happens to them.

“Despite such rarity, this is the ninth example of this model to sell at Gardiner Houlgate, and it never ceases to amaze me that, after 60 years, we’re still able to discover such rare pieces.

“This sale proves it’s worth checking through your drawers to see what’s there.”

The watch was sold by the original owner’s daughter and son-in-law – also Mansfield residents – who wish to remain anonymous.

The Rolex Submariner 5512 with the Explorer 3-6-9 dial was only produced for a short period in the early 1960s.

Very few survive with their original dial because, when they were returned to Rolex for servicing, the dial was regularly replaced with a new one.

The original owner’s son-in-law said: “Things like this just don’t happen to us. Having worked all our lives to be able to enjoy retirement, this will give my wife and I the added financial security we’ve dreamt of.

“I imagine you’d feel like this if you had a big win on the Premium Bonds.”

The original owner was born in London but moved to Mansfield during the Second World War to work in the mines as part of the then government’s “Bevin Boys” conscription programme.

After a spell as a driver for East Midlands buses, he returned to the mines as a medical attendant. He died in 1995.

The Rolex was bought from Watches of Switzerland in London. It retains its original box, guarantee and service booklet.