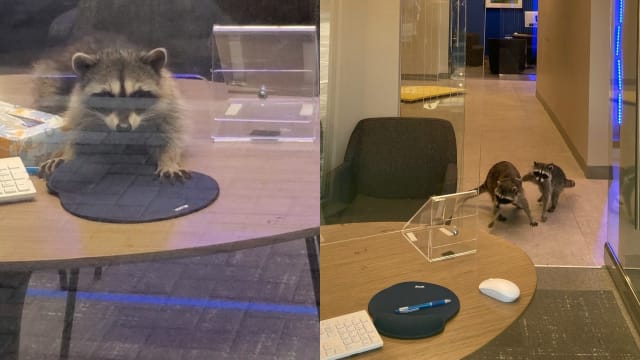 Two raccoons were caught red-handed after breaking into a bank in California on Tuesday when a member of the public spotted them inside.

The masked invaders were seen inside the Redwood City bank by a member of the public who had been using an ATM at the time.

The Peninsula Humane Society & SPCA (PHS/SPCA) were called to the scene and, after 10 minutes, were successful in returning the furry pair to the outside world.

“It’s not every day an animal organisation gets called to deal with a bank break-in, but since the bank robbers were masked bandits of the wildlife kind, we were indeed the appropriate responders,” said PHS/SPCA’s communications manager Buffy Martin Tarbox.

“The bank managers let our rescue staff into the bank, and after about 10 minutes of chasing the raccoons around the bank, we were finally able to safely shoo them outside. They apparently didn’t want to leave the bank.”

The bank had been closed at the time, allowing the raccoons free rein to wreak havoc after it is believed they entered through air ducts.

They took the opportunity to knock a computer over and reportedly ate a number of almond cookies – they are not believed to have made away with any money, and were not injured during their adventure.