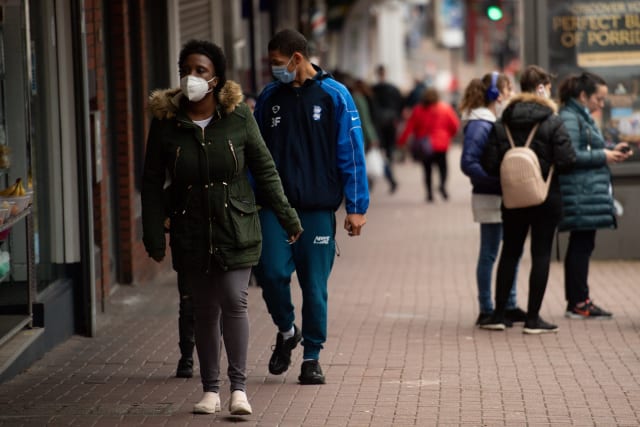 The Government is to set out its plans to tackle the disproportionate effect that coronavirus is having on ethnic minority groups.

In an oral statement on Thursday, women and equalities minister Kemi Badenoch will outline a number of new measures which the Government is taking to protect those at risk.

It comes as an expert said that he is not convinced structural racism played a role in the healthcare outcomes of black and minority ethnic people during the first wave of the Covid-19 pandemic.

Dr Raghib Ali, who is senior clinical research associate at the University of Cambridge’s MRC epidemiology unit, said that the spotlight should be on risk factors such as obesity, age, population density, occupational exposure and overcrowded housing, involving not just the ethnic minorities but the population as a whole.

“But the truth, as we know from data, particularly from Scotland but also from England, is that most of ethnic minority groups actually have better overall health and lower rates of all-cause mortality than white groups.”

Instead of focusing on ethnicity as a potential risk factor for severe Covid-19, individuals should have a “personalised risk assessment” to determine how likely they are to become critically ill with the disease, Dr Ali added.

He said: “We have to adjust the risk factors rather than just saying it’s ethnicity, so the purpose of adjusting is to try to understand what’s causing that increased risk in blacks and south Asians.

“Of course, they still have an increased risk (that is) maybe two, three times (that of white people), depending on which papers you look at.”

He added: “You have to target the risk factors because ethnicity is basically a proxy for those risk factors.”

Dr Ali, who is set to become one of the Government’s new expert advisers on Covid-19 and ethnicity, said that in the early stages of the pandemic, it was reasonable to use ethnicity as a proxy because there was not enough information about the disease.

But as new evidence comes to light, he said “it doesn’t make sense to put all minorities into the same basket” because not everyone from those communities is at higher risk of becoming critically ill or dying.

Ms Badenoch is expected announce a range of measures to help protect those at risk, including a new £25 million community champions scheme funded by the Ministry of Housing, Communities and Local Government.

Work is also under way to make it mandatory for ethnicity to be recorded as part of the death certification process, in order to establish “a complete picture” of the impact of the virus on ethnic minorities.

Other steps the Government will take include updating the shielded patient list and establishing a series of roundtables over the coming months with faith leaders and other community representatives.

Ms Badenoch said: “We have invested in a strong package of measures to target messaging, develop the data we have available and make sure everyone is as safe as possible at home or in the workplace.

“Today’s report marks an important first step in our journey to understand and tackle the disproportionate impact of Covid.”

Ms Badenoch’s statement comes after a report by the Cabinet Office’s race disparity unit (RDU) said current evidence shows that a range of socioeconomic and geographical factors contributed to the higher infection and mortality rates for ethnic minority groups.

But it said a part of the excess risk remains unexplained for some groups.

A Public Health England (PHE) report published in June, entitled Covid-19: Review of disparities in risks and outcomes, indicated that a range of people, including those from ethnic minority backgrounds, were most disproportionately impacted by Covid-19.