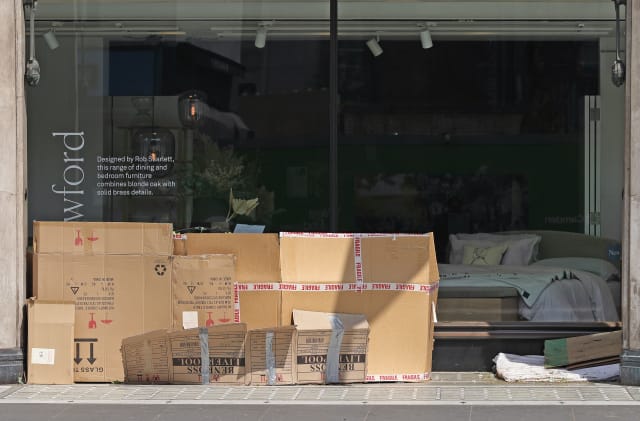 Charities have hit out at rules which could see rough sleepers who are EU citizens deported from the UK when freedom of movement ends, branding it "cruel" and "a step backwards".

The new rules will come into force in January as part of the Government's bid for tougher border restrictions and a "firmer and fairer" immigration system after the Brexit transition period.

It means EU citizens found rough sleeping could be deported if they refuse support, like the offer of accommodation and benefits, from authorities as is already the case for non-EU citizens found on the streets.

Particularly those who commit crime or display anti-social behaviour, like aggressive begging, could be told to leave the country, according to officials who are said to be alert to the sensitivity around the subject.

The decision is part of a long-term Government plan to get people off the streets, something which is apparently of great interest to the Prime Minister and some of his Cabinet.

But the move would be a last resort after other options were exhausted and checks would be carried out to make sure those affected were not victims of slavery or trafficking, officials stressed.

Jon Sparkes, chief executive of homeless charity Crisis, said: "This new policy from the Government is unacceptable and cruel.

"It will push people who are in the UK legally and facing homelessness further into the fringes of society, rather than encouraging them to seek support.

"While the Government has stressed that this policy will only be used sparingly for people who refuse support, it is not as clear cut as this.

"We know through our services that people who have no recourse to public funds because of their immigration status have little or no access to support in the first place, and are forced into rough sleeping if they are unable to work.

"This is a situation that will only worsen as the economic impact of the pandemic begins to bite."

He said providing housing and support was the way to end rough sleeping among non-UK nationals rather than "threatening deportation".

Polly Neate, chief executive of fellow charity Shelter, told The Guardian the policy appeared to be a "huge step backwards" while Labour's shadow home secretary described the idea as "immoral".

Meanwhile other changes to immigration rules have been met with criticism from campaigners, with one charity accusing the Government of introducing a range of "sweeping" immigration rules "through the back door" amid the coronavirus pandemic.

The rules, coming into force from January 1, could see EU criminals barred from entering the UK as is already the case with non-EU citizens.

It will mean anyone sentenced to more than a year in jail, including tourists and other visitors, will not be allowed in the country, although there will be some exceptions if barring someone could be a breach of the European Convention on Human Rights.

The changes will not apply to EU citizens who have been granted immigration status under the EU Settlement Scheme, or any others protected by the terms of the Withdrawal Agreement.

But their right to be in the UK could be revoked if they commit crimes after January 1, the Home Office warned.

Questions remain as to how the criminal history of travellers will be checked if the UK loses access to EU crime databases at the end of the Brexit transition period, given no agreements have yet been reached amid the ongoing negotiations.

Minnie Rahman, of the Joint Council for the Welfare of Immigrants, said there had been "no consultation" over the plans, adding: "Leaving the EU should have prompted the Government to create a better immigration system.

"Instead, the new rules do nothing to solve existing problems: rather than taking the opportunity to treat all migrants as well as Europeans were treated before Brexit, the Government has chosen to level down and further restrict opportunities and rights for everyone who moves here."