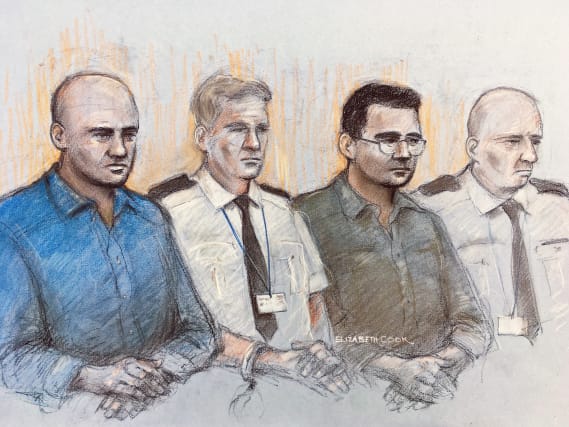 A Vietnamese man has told how his parents paid £13,000 for a “VIP” smuggling trip to Britain days before the deaths of 39 migrants.

Prosecutors have alleged his was one of two successful cross-channel runs before the deaths of 39 Vietnamese nationals on October 23 last year.

They suffocated while being transported in a sealed lorry trailer from Zeebrugge in Belgium to Purfleet, Essex.

The man, referred to as Witness X, said there were two types of service, one where the lorry driver was ignorant of the human cargo and the “VIP” service in which the driver was aware.

Asked which service he had opted for, Witness X said: “VIP – where the lorry driver knows you are there.”

The Vietnamese national told jurors that he set out in 2019 for a better life in the UK despite knowing of visa difficulties.

Asked how his family felt about it, he said: “They feel good for me.”

Last February, he tavelled with a friend by plane to Poland where he enrolled on a business course and got a Schengen visa.

From there, he travelled to France as the “next step” to the UK.

He saw pictures on Facebook of a Vietnamese person called Hieu who was already in Britain, jurors heard.

Hieu passed on details of a Vietnamese contact called Phong who could get him an “illegal” journey to the UK, the witness said.

He contacted Phong through the messaging app Viber and was told the cost would be £13,000.

On October 10 last year, the witness was given a postcode and travelled to a flat by a lake an hour from Paris.

He said he was told to bring nothing with him so had no papers or luggage apart from a few clothes and a mobile phone.

The witness told jurors he joined a group of Vietnamese people “just waiting for the journey”.

They were counted and told to switch off their mobiles and hand over money for the next leg of their journey.

Two or three taxis took them to a pick-up point 90 minutes away, the court heard

The migrants hid in a field by a factory and waited for the lorry to arrive with two Europeans who had joined them.

After about 15 minutes, an English speaking truck driver described as “tall” and “a little bit fat” arrived and opened the rear of his trailer.

Showing them inside, the driver said “quickly, quickly” and told them to “keep quiet”, the witness said.

Before arriving at the dock, they stopped for water and were given further instructions by the driver including on how to go to the toilet.

The witness said they were told: “If anybody want to ease yourself, do it in the bag and everybody have to stand up and stand together and don’t make a sound.”

The witness said he did not understand why they were being told to stand together in the middle of the trailer.

The sea voyage to Britain in the container took about eight hours and left them tired with some sleeping, jurors heard.

When the doors were finally opened in the UK, some people with European accents helped them out and told them to “move fast” into black cars, he said.

Before setting off again, Witness X’s car driver asked him: “Do you like this country?”

He was driven to Phong’s flat in London, where he had to stay until his parents in Vietnam had transferred the £13,000 payment.

Asked what his plan had been, Witness X said: “I’m going to go to the Home Office to apply for my papers.”

Jurors were told that an examination of his mobile phone placed it in Paris on October 10 and in south-east London the next day.

On October 23 last year, police found a white trailer parked by the one in which the 39 migrants were found.

This was the same trailer dropped off at Zeebrugge by lorry driver Eamonn Harrison and picked up by Christopher Kennedy at Purfleet in October 11 last year, the court heard.

Witness X’s thumbprint was recovered from inside the trailer.

Harrison, 23, of County Down, and alleged organiser Gheorghe Nica, 43, of Basildon, Essex, have denied 39 counts of manslaughter.

Jurors heard that four other men have admitted to playing a part in the people smuggling. These include Robinson, who found the bodies, and haulier boss Ronan Hughes, who have both pleaded guilty to manslaughter.

Earlier, Mr Justice Sweeney explained that Witness X had been granted anonymity so he “feels comfortable and is able to give his best evidence”.

The judge said: “You must not hold it against the defendants in any way, not least because it is accepted that the witness’s anxiety is not related to the four men on trial before you.”