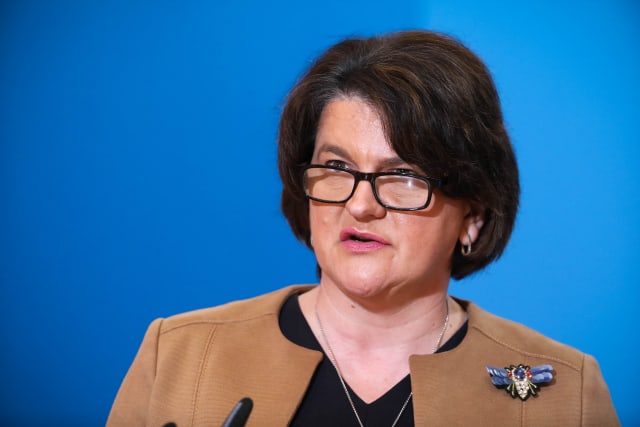 Stormont ministers have vowed to formulate a new coronavirus strategy that will avoid the need for another lockdown in Northern Ireland.

First Minister Arlene Foster said ramping up test and trace capacity, increasing hospital capacity, making businesses Covid-secure and introducing weekly testing regimes for key workers were among steps that could keep the region’s economy afloat in the absence of a vaccine.

“Obviously you could go down the road of having a circuit-breaker, then a break, then another circuit-breaker – we’re saying that we don’t think that is the way to proceed,” said the DUP leader.

Sinn Fein Junior Minister Declan Kearney said while nothing could be taken off the table, the Executive was not envisaging another lockdown.

Mr Kearney said there was a need for a “huge cultural and behavioural shift” to increase compliance with basic anti-infection measures, so more severe steps could be avoided again.

Northern Ireland is in the first week of a four-week circuit-break. Pubs and restaurants are closed, except for takeaway and deliveries, and schools are shut for a fortnight.

At a meeting of the Stormont Executive on Thursday, ministers agreed to a series of further financial measures for those impacted by the latest clampdown.

Families eligible for free school meals will receive £1.3 million worth of payments in lieu during the two-week school closure – a period that includes the traditional mid-term Halloween holiday.

Economy Minister Diane Dodds is also taking forward a range of business support schemes to help those who were ineligible for previously announced initiatives.

Supply chain businesses impacted by the closure of the hospitality industry and mobile workers such as driving instructors are those set to benefit.

There were five further Covid-19-linked deaths and 1,042 new cases announced on Thursday. The death toll recorded by Stormont’s Department of Health now stands at 634.

There are currently 291 patients with Covid-19 being treated in hospital, with 33 in intensive care.

Mrs Foster said while infection rates remained high, there was “early evidence” that recent restrictions were starting to work.

She said Stormont’s medical and scientific advisers were “optimistic” that case numbers will soon begin to fall.

“There are early indications our shared efforts are turning the tide,” she said.

At a Stormont media briefing, Mrs Foster and Mr Kearney were repeatedly pressed on the prospect of further lockdowns being required during the winter months.

The First Minister said given the alarming rate of the virus’s spread, taking no action last week “was not an option”.

“I think strategically, we have to look at things in a different way. We have to see what other interventions we can take, because we all recognise that the virus is going to be with us for a length of time.”

Mr Kearney is the only one of four Sinn Fein ministers in the Executive who is currently not self-isolating. He joked that he was the party’s “designated survivor” in the powersharing coalition.

He said the circuit-break was designed to “buy time and create space”.

He acknowledged concerns of members of the public that the four-week intervention would be followed by another period of tough restrictions.

“Let me be very clear, that is not the Executive’s strategy,” he said.

“We are determined to use this space to double down on developing an integrated strategy to normalise life and maximise public safety in the coming months.”

He added: “Last Tuesday we were faced with a cliff-edge so we had to make a very, very clear decision how to deal with that scenario which we were presented with.”

“As politicians and pragmatists, no option should be left off the table,” he said.

“That said, our strategy is not to move from one intervention, to come out of it, and then to move on to another intervention.”