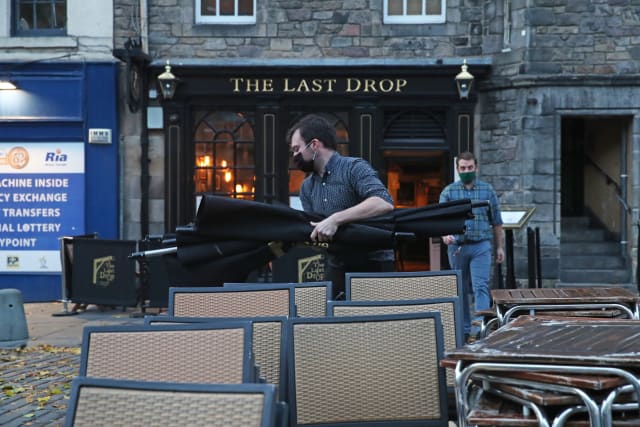 Five hospitality industry bodies in Scotland have launched legal action against restrictions imposed on the trade by the Scottish Government.

The move comes after First Minister Nicola Sturgeon announced that measures on the sector due to end on Monday will be extended for a further seven days.

These include the closure of licensed premises in the central belt and the curbing of alcohol sales indoors in other parts of the country.

Paul Waterson, group spokesman, said: “We understand and entirely support the goal of suppressing the virus, but our sector is at breaking point.

“Despite having more mitigation measures than other sectors and the vast majority of operators going above and beyond in ensuring customer safety, our sector has been repeatedly targeted without consultation and without the evidence.

“Anecdotal evidence is not the way to go about making Government decisions and the sector should not be used as a balance to uncontrollable risks in other far less regulated and unmonitored sectors.

“The economic support offered to premises doesn’t come close to compensating the businesses and means jobs are being lost and livelihoods ruined.

“Any measures must be proportionate and be backed up by evidence, we do not believe that is the case here.

“The industry simply cannot endure the extension of the current restriction, further restrictive measures expected from the 2nd of November, or to get into a stop-start situation.

“We are now facing the end of our industry as we know it. The battle is now on to save the hospitality sector.”

The pre-action letter requests a response to legal challenges by 4pm on Wednesday, otherwise the parties say they will ask the courts for a judicial review.

Restrictions are now due to last until a new tiered system is put in place by the Scottish Government on November 2, which will impose measures based on the prevalence of coronavirus in the local area.