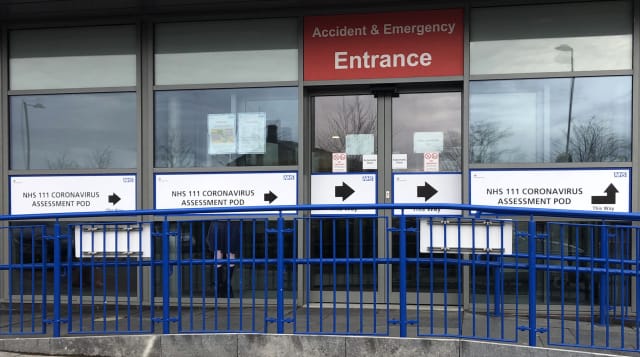 Hospital staff battling a second wave of coronavirus have said they are exhausted and disheartened to see people ignoring the rules.

But, the medics at Whiston Hospital in Knowsley, a Merseyside borough which has seen some of the highest infection rates in the country, say they will “soldier on” as numbers of patients with the virus start to approach the levels they were at the peak of the pandemic.

Ward manager Nadine McStein told the PA news agency adrenaline had powered staff through the first wave of the virus but, after a lull during the summer, it had “come back and hit us with a vengeance”.

“They soldier on, there’s a great sense of camaraderie amongst all the staff within the hospital.”

Ms McStein said she felt the virus was now “unrelatable” for the general public.

“I don’t think they appreciate the extent of what the NHS is going through and I think it’s disheartening to see people protesting and people going against the rules and regulations because we are definitely seeing the impact that’s having on people now,” she said.

The hospital’s medical director Rowan Pritchard Jones said there were concerns about whether communities were following advice.

He said: “It is so difficult for those of us who walk in every day to care for the most critically ill patients that we know someone sprayed ‘hoax’ on the side of a town hall. But they have.

“We work really hard to be upfront with our community who we are here to care for. We need them to do their bit as well to try and manage these numbers.”

Mr Pritchard Jones said the last fortnight had seen the biggest rate of change of Covid-19 patients, bringing them almost back to the levels of earlier in the year, but fewer patients were now on ventilators due to developments in treatment.

He said: “This doesn’t feel like the sprint that maybe we started out on earlier in the spring.

“It feels far more like a marathon with some difficult hill climbs partway through it and I feel like we’re on one now.”

Clinical director of intensive care Dr Ascanio Tridente said there were more than 120 patients with coronavirus in the hospital, compared with fewer than 10 at the start of September.

He said the pressures had taken a “significant toll” on staff but he was confident they would “pull through this together”.

“At the same time, we also know how deadly it can be and that it is serious and must not be underestimated.”

Emergency medicine consultant Dr Andy Ashton said positive coronavirus cases in the health trust doubled every week for the first four weeks from September and were now increasing at a rate of 60% per week.

He said: “I think people have let out a big, long sigh and realised that we’re in for another long, hard winter.”

Dr Hannah Coles, also an emergency medicine consultant, said there was a better understanding of what they were dealing with for coronavirus patients and urged people with other health conditions to continue to come to the hospital if they needed urgent treatment.

She said: “If patients are unwell and they feel they need to be seen then they should still attend the emergency department and they need to be reassured that they will still be seen and managed when they do come to us.”