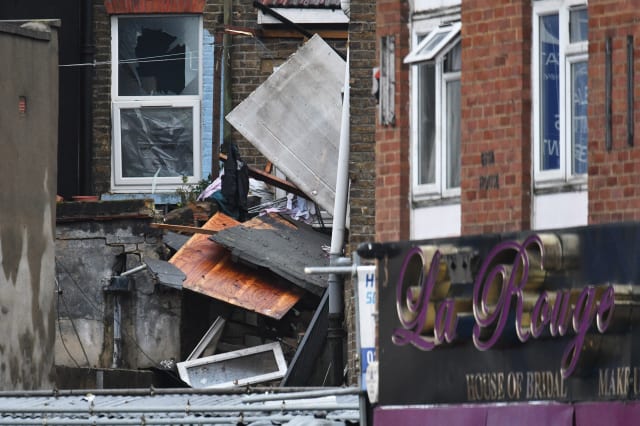 Dozens of residents are still unable to return to their homes in west London following a suspected gas explosion at a shop which killed two people.

London Fire Brigade (LFB) said the bodies were found in the flat in King Street, Southall, above the Dr Phone repair shop, which was obliterated by the blast, and they have not yet been formally identified.

Removal of the bodies continued on Thursday evening, while some 50 residents who were evacuated from King Street have still not been allowed to return home.

LFB was called to the scene at around 6.30am on Wednesday morning and used specialist equipment including search dogs to look for people trapped inside the collapsed shop and the property above.

A firefighter was pictured carrying a small child away from the scene as ambulance, police and fire teams began the rescue mission.

Crews from six engines rescued a child and four adults from the rear of the property in the initial stages, using a ladder, while a further 14 adults and two children self-evacuated from surrounding properties.

People living two streets away said their homes “shook” from the force of the blast, and many of them were woken up by “what sounded like a bomb exploding”.

The owner of Dr Phone, Javinder Singh, said he was “in shock” to wake up to a phone call early on Wednesday telling him his business had been “completely destroyed”.

He said: “I don’t know what happened. I was told I couldn’t go to the shop, but you can see from the pictures it’s totally destroyed.

“I don’t know how to explain how I’m feeling. I have lost everything.

“I don’t know what to say – I’m in shock. I’m really scared that now I don’t know how to survive.”

He added: “My source of income has already gone and already we were struggling from the coronavirus.”

The Metropolitan Police said work was “ongoing” at the premises more than 36 hours later, and road closures remain in place.

Local authorities are providing temporary accommodation for residents evacuated from the street.