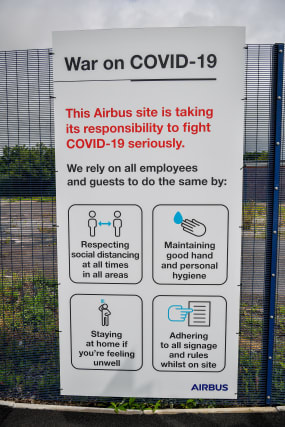 The speed of decline in the manufacturing industry slowed from July, but the sector remains weakened, according to the Confederation of British Industry (CBI).

The trade body revealed output volumes in the three months to October fell at their slowest pace since March 2020, at the start of the national lockdown, with output dropping in 10 out of 17 sub-sectors.

Airlines and plane makers caused the biggest dent as the industry remains on its knees due to the global pandemic decimating tourism and reducing business travel, according to the CBI’s latest manufacturing survey.

A sign of the sector’s struggles was highlighted by aerospace giant Airbus, which announced 1,700 jobs will go at its sites in Broughton, North Wales and Filton near Bristol.

The CBI data from 310 manufacturing firms found that total new orders were broadly flat – up just 3% in the three months to October following their sharp drop of 60% in July.

Domestic orders picked up slightly – up 5% from a fall of 64% – while export orders fell at a much slower pace than the previous quarter, down 14% versus a previous fall of 62%.

Job losses in the industry are still continuing, but this was at a slower pace, down 27%, than recorded in July, when it fell 47%. The industry predicts this will flatten out in the next quarter.

Business sentiment in the three months to October was stable for a second consecutive quarter, but concerns over exports fell at a far quicker pace than in July.

Rain Newton-Smith, CBI chief economist, said: “Conditions remain tough in the manufacturing sector, with output and orders still down on the quarter, albeit to a lesser degree. The government must stay on the front foot when it comes to providing support for the sector and wider economy.

“It is more crucial than ever for the Government to listen to the experiences and concerns of businesses and ensure support matches the tightness of local lockdowns.

“Additionally, signing a trade deal with the EU would help create some clarity that firms so badly need during this fraught period.”