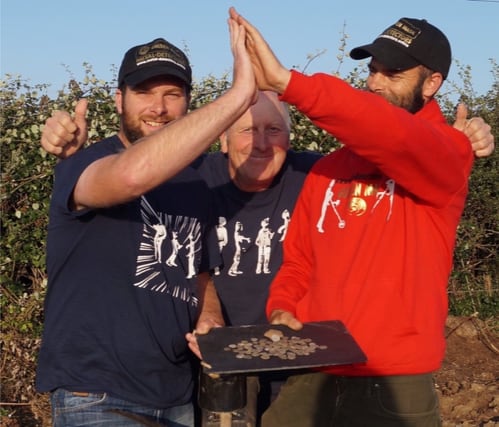 An “excessively rare” 900-year-old coin, found by a family of metal detectorists, could sell for up to £7,000 at auction.

The silver penny, issued in the twelfth century, was discovered by 64-year-old landscaper John Denham in a farmer’s field in Wallingford, Oxfordshire, in September.

John, who found the coin on a metal detecting trip with his sons Simon, 39, and Steven, 31, dug it up from beneath four inches of soil.

The auction house said the penny was issued by Henry of Anjou some time between 1139 and 1148 during ‘the Anarchy’, a period of civil war in England.

The conflict saw Henry and his mother Empress Matilda try to gain control of south-west England from King Stephen, with the town of Wallingford once being the easternmost stronghold of Henry’s supporters.

He was crowned Henry II of England after Stephen’s death on December 19 1154.

John, from near Wallingford, said: “We thought this penny might be something special but, once it had been identified and recorded, we were still surprised to learn how valuable it was.”

He started metal detecting in the early 1980s using a £100 detector and later inspired his sons to take up the hobby.

John added: “The field where I found it had recently been ploughed and planted.

“Many ancient coins get damaged by farming machinery. We’re very excited to see what this penny achieves at auction.”

Simon, also a landscaper, said his father had made the find with a metal detector he had given him as a gift.

He said: “As a family, we’re passionate about metal detecting. We’re a team. We’re in it purely for the enjoyment of making the finds.

“It’s a reward seeing them come out of the ground. It’s not about money. This is the first thing we’ve ever decided to sell and we’re only doing that because the coin is so important.”

It is not the family’s first find. In August, they discovered a rare Saxon brooch of as yet unknown value, which is currently being assessed by a museum in Oxford.

Over the years, they have also uncovered silver hammered coins, Saxon and Roman artefacts and a Papal bulla, a lead seal that would have been attached to a papal document to guarantee authenticity.

The coin will be listed as lot 314A in Hansons Auctioneers’ Historica, Coins, Banknotes and Antiquities Auction as one of the rarest items for sale.

Mr Staples added: “John’s coin is the only complete example recorded where both the mint town and name of the moneyer can be read.

“The reverse of the penny tells us that it was made by Robertus at the Wallingford mint, a moneyer who was not previously known to have minted coins there. This makes it excessively rare.”

Any proceeds from the sale of the coin will be split 50/50 with the landowner, the auction house said.