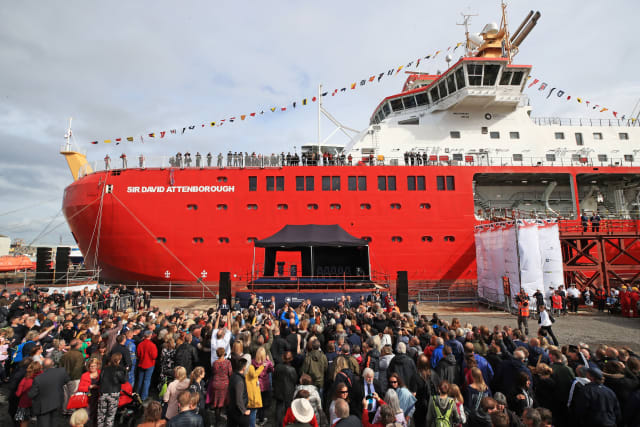 The UK’s most advanced polar research vessel – the RRS Sir David Attenborough – is set to leave its shipyard on Wednesday to begin technical sea trials before commencing service in a year’s time.

The ship is to sail from the Cammell Laird shipyard across the Mersey to the Liverpool cruise terminal at high tide for crew familiarisation, before two weeks of technical trials off the coast of north Wales.

Operated by the British Antarctic Survey (BAS), the new vessel is expected to transform UK research in the polar regions, including extensive work designed to boost understanding of climate change.

“This magnificent ship will take UK scientists deep into the heart of the ice-covered polar seas,” BAS director Professor Dame Jane Francis said in a statement.

“With state-of-the-art technology they will investigate the dramatic changes in the polar oceans.”

After the ship’s two weeks of technical tests, the BAS crew will undertake 50 days of intensive training at Holyhead Port before more trials around the Irish Sea.

Early next year the ship will conduct ice trials in the Arctic, and in November 2021 make its maiden voyage to Antarctica.

David McGinley, chief executive of Cammell Laird, said: “This vessel is a true celebration of British expertise – from the team who built it right through to the scientific community that will call this ship home.

“The RRS Sir David Attenborough is the single biggest and most ambitious build in the history of Cammell Laird and it’s an incredibly proud moment to see her embark on sea trials.”

While a public vote to select a title for the ship returned the name Boaty McBoatface, officials intervened to name it after Britain’s famed broadcaster and natural historian. A research submarine carried on the ship instead has taken the name elected by the public.