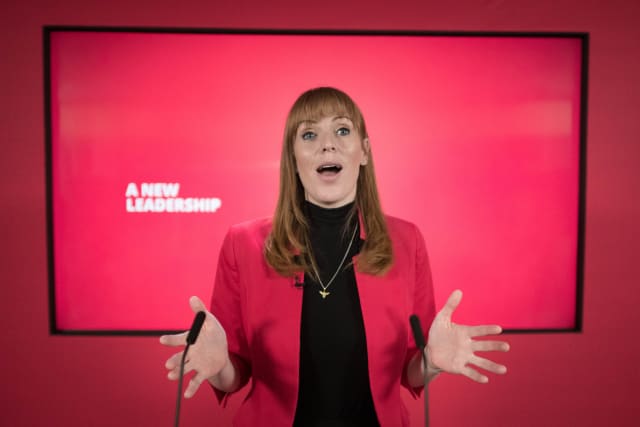 Labour deputy leader Angela Rayner has apologised after she was accused of calling a Tory MP “scum” during a fiery Commons debate.

Conservative MP Chris Clarkson said the insult was hurled at him after he insinuated that members of the shadow front bench believe the pandemic is a “good crisis” to exploit.

In statement on Wednesday, Ms Rayner said: “I apologise for the language that I used in a heated debate in Parliament earlier.”

Mr Clarkson’s colleagues piled in to criticise Ms Rayner, MP for Ashton-under-Lyne, with Katherine Fletcher (South Ribble) accusing her of having “shamed Manchester, shamed this House” before adding: “She should apologise.”

Deputy Speaker Nigel Evans said language used in the debate had made him “wince”.

Tensions in the Commons were high following the collapse of talks between the Government and Greater Manchester leaders over a financial package for the region after it entered Tier 3 restrictions.

Ministers came under fire from the Opposition benches and some of their own MPs, but other Conservatives defended the approach taken.

Mr Clarkson (Heywood and Middleton), speaking in a Labour-led debate on economic support for areas with greater restrictions, said: “I implore members opposite to park the opportunism.

“I know (shadow education secretary Kate Green) thinks this is a good crisis that the Labour Party should exploit, and I know she speaks for a lot of her frontbench colleagues when she says that – you just need to see it in the support, U-turn, oppose approach that has characterised their hindsight-heavy behaviour.”

At this point he was heckled by Ms Rayner, who appeared to be heard saying “scum”.

Mr Clarkson asked: “Excuse me, did the honourable lady just call me scum?”

“From the front bench we do not have remarks like that. Not under any circumstances, no matter how heartfelt it might be. Not at all.”

Making a point of order in response to the accusation, Ms Rayner said: “I think one of the things I’d ask for your guidance on is (Mr Clarkson) saying things about the front bench which is inaccurate in their speech and I’d ask them to withdraw it.”

Dame Eleanor replied: “It is not for the chair to decide what is accurate or inaccurate, I cannot make such a judgment.

“But of course, I will ask (Mr Clarkson) to be reasonable in what he says and to be careful of his remarks.

“And I’m sure that if (Mr Clarkson) feels that he has said anything that is offensive to (Ms Rayner) then he will undoubtedly withdraw and apologise immediately.”

Resuming his speech, Mr Clarkson said: “Thank you, Madam Deputy Speaker, and thank you for your guidance. To clarify, I asked (Ms Rayner) if she called me that (scum) – that is what I heard.”

Mr Clarkson proceeded with his speech without withdrawing his earlier comments.

Conservative MP Sara Britcliffe (Hyndburn) said of Ms Rayner: “The attitude that I’ve just seen in this chamber is what turned many of my residents against the Labour Party. It’s unacceptable.”

Opening the debate, Ms Rayner earlier called the Government’s financial support package for Greater Manchester “an insult” and also revealed that her aunt had died last week from Covid-19 at Stepping Hill Hospital in Stockport.

Labour’s motion calling for a “fair national criteria” to be put in place to support areas facing additional restrictions was defeated by 261 votes to 340, majority 79.

Labour’s Rebecca Long-Bailey (Salford and Eccles) criticised the Government’s strategy, telling MPs: “To most this doesn’t appear to be an exercise in infection control.

“It appears to be an exercise in keeping the North and other Tier 3 areas away from the rest of the country to engage in our own version of the Hunger Games – where only the fittest and wealthiest will survive.”

Labour MP Mike Kane (Wythenshawe and Sale East) also told the debate: “Not since the Peterloo Massacre of 1819 has the state displayed such coercive power over the people of Greater Manchester.”

An estimated 18 people died in the Peterloo Massacre after cavalry troops charged into a crowd of about 60,000 pro-democracy and anti-poverty protesters.

Tory William Wragg also urged MPs “not to underestimate the anger felt by the public” over the greater restrictions.

He said: “I do not support Labour’s suggestion of a national lockdown, which makes little sense, at all.

“However, what concerns me most is the coming hardship, the rising unemployment and some people’s despair.

“Indeed, I cannot help but reflect that the medicine risks being worse than the disease.”

Labour’s Toby Perkins (Chesterfield) also said: “If there is actually a formula, it doesn’t add up, they don’t even lie well. This Government is so inept that it can’t even get their story straight when they’re screwing people over.”

For the Government, Treasury minister Steve Barclay said the best way to help the workers referenced in Labour’s motion “is to reduce the spread of the virus through targeted action”.

He told the Commons: “All members of this House want to protect the lives of our, not just family members, but our constituents, and balance the actions needed to do so with protecting jobs and businesses.

“That is why the PM (Prime Minister) was right to outline a balanced approach, taking the difficult decisions to save lives and keep the R rate down, while doing everything in our power to protect the jobs and livelihoods of the British people.”