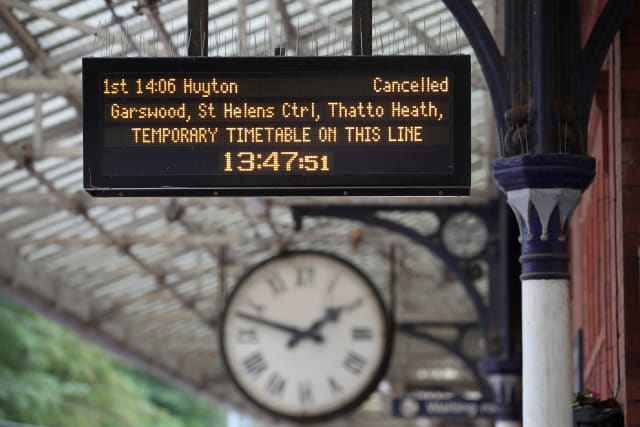 Train passengers are missing out on tens of millions of pounds of compensation for delayed journeys each year, new figures indicate.

Some 37% of travellers entitled to a payout made a claim for their most recent delay, a survey for Transport Focus suggested.

This is up two percentage points from research carried out in 2018.

More than half (51%) of passengers who did not claim the compensation they were entitled to said it was “not worth bothering for the amount I’d get back”, while 11% said “the process was too complicated”.

More than 11,000 people were surveyed for Transport Focus between March and April.

Transport Focus chief executive Anthony Smith said: “This research shows that, while train operators have improved, there is still a way to go to make it easier for passengers to claim and more aware of the compensation they are entitled to.

“While delay compensation has been less of an issue during lockdown, improving reliability and a simpler, more automated claims process for when things do go wrong can help increase confidence in the railway as passengers return in future.”

The survey was conducted in March and April.

Department for Transport (DfT) data shows rail firms paid out £89.4 million in compensation during the 2019/20 financial year, up from £79.0 million during the previous 12 months.

Jacqueline Starr, chief operating officer at industry body the Rail Delivery Group, said: “This data shows that more passengers are getting the compensation they’re entitled to, following train operators’ work to proactively notify people when they can claim.

“Train companies are continuing to raise awareness of Delay Repay through train announcements, email reminders and Facebook Messenger, while making the process easier with one-click and automatic compensation for delays of just 15 minutes.”

The amount of compensation which passengers can receive is based on the type and cost of the ticket held, the length of the delay and the train operator involved.

Most firms offer the Delay Repay scheme, with 17 paying out once a journey is delayed by at least 15 minutes.

Rail passenger numbers are at around 35% of pre-coronavirus pandemic levels, according to latest DfT figures.