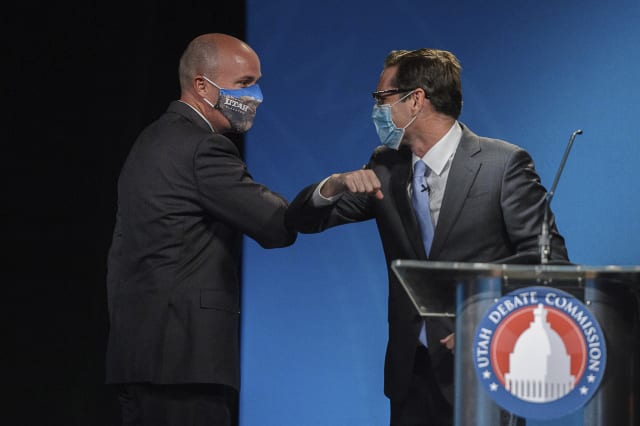 Opposing politicians in Utah have released a joint campaign advert, showing that even though they disagree they can still be civil.

Lt. Gov. Spencer Cox of the Republican party and Chris Peterson, a Democrat, created an advert that shows them standing side by side to discuss what they do agree on.

They hope to be “an example” to the rest of America ahead of the general election.

Speaking one after the other, Mr Peterson began and said: “We can debate issues without degrading each other’s character.

Mr Cox, wearing a red elephant pin, continued: “We can disagree without hating each other.

Mr Peterson then said: “And win or lose, in Utah we work together.

“So let’s show the country there is a better way,” Mr Cox concluded.

Sharing the clip on Twitter, Mr Cox said: “I want to thank Chris for his willingness to record these PSAs with me.

“No matter who wins the presidential election, we must all commit to a peaceful transfer of power and working together. So please vote and then let’s #standunited for a better America.”

Mr Peterson shared the clip, thanking his opponent for participating.

He said: “With the deep divisions in our country, it can take grace and courage to try to work together. No matter who wins the presidential election, we must all commit to a peaceful transfer of power.”

With less than two weeks to go until polling day, the presidential campaign has not always been as civil.

While Joe Biden has accused the President of lying, Donald Trump has dubbed his opponent “sleepy Joe” and said he has dementia.

Opinion polls show Mr Biden is currently out in front polling at 51%, ahead of Mr Trump’s 31%.