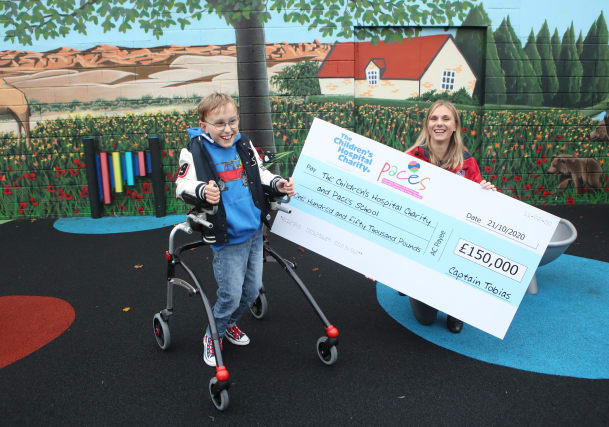 A nine-year-old boy who has raised more than £150,000 through a series of challenges inspired by Captain Sir Tom Moore said he is “chuffed to bits” at the support he has received.

Tobias Weller – dubbed Captain Tobias by his supporters – who has cerebral palsy and autism, has completed two marathon-long events since the start of the lockdown, despite being unable to walk or stand unaided.

Seven months ago he set out to raise £500 by walking 26.2 miles over three months through his daily exercise in his Sheffield street.

He then embarked on another marathon, this time using a race runner.

When he finished that second challenge, on August 1, he was cheered over the finish line by Olympic champion Dame Jessica Ennis-Hill.

On Wednesday, Tobias closed his fundraising page for donations having raised £150,000 from more than 6,000 supporters.

The money is being split between his two favourite charities – Paces, the special school where he is a pupil in Sheffield, and Sheffield Children’s Hospital, where he regularly visits for treatment.

Tobias said: “Boom! I cannot believe how much money I have raised and am chuffed to bits so many people have supported me over the past few months.

“Thank you to everyone who has cheered me on and donated.”

His mum Ruth Garbutt said: “£150,000 is a massive amount of money and I am so proud of Tobias and everything he has achieved.

“There was no way in the world we would have predicted how much support he has had – from sporting legends to the police, our friends and family to our neighbours. I am so grateful to everyone for their help, kindness and generosity.”

Despite ending this stage of his fundraising, Tobias is already planning a third marathon – this time using a new trike bought by Sheffield firm Jiraffe.

Mrs Garbutt said: “First and foremost, this is a challenge for Tobias. He is so motivated and just wants to keep going.”

Tobias’s school, Paces, says it teaches children life-changing skills using conductive education – such as sitting, standing, walking, speaking, communication and self-care – in an environment where they can have fun, develop friendships and feel like they belong.

Julie Booth, head of fundraising at Paces, said: “The amount of money Tobias has raised thanks to his incredible efforts is staggering.

“We are so grateful to him and his family for everything they have done. He’s an inspiration to us all.

“The money will go towards our campaign to build a new home for Paces School, allowing us to support many more children and young people in the future. It will make a huge difference.”

David Vernon-Edwards, director of The Children’s Hospital Charity, said: “Tobias’s remarkable determination and generosity of spirit in completing his two lockdown marathons has touched the hearts and inspired people not only in Sheffield, but across the country and around the world.”

Mr Vernon-Edwards said: “We’re very proud of him and all the staff at Sheffield Children’s, whose excellent care continues to help children like Tobias to pursue their dreams every day.”