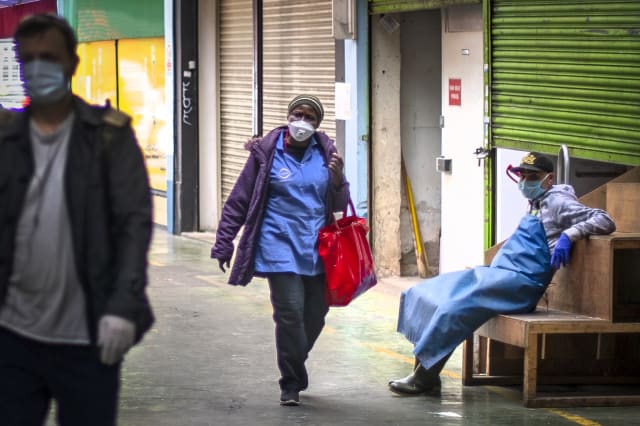 The Government is to set out its plans to tackle the disproportionate effect coronavirus is having on ethnic minority groups, as a new report delves into the key factors that put non-white people at high risk.

A Public Health England (PHE) report published in June, entitled Covid-19: review of disparities in risks and outcomes, indicated that a range of people, including those from ethnic minority backgrounds, were most disproportionately impacted by Covid-19.

In its first quarterly report, the Cabinet Office’s race disparity unit (RDU) has gathered evidence and data around this topic, and summarised the work undertaken across government since the PHE review.

The report, published on Thursday, says current evidence shows that a range of socioeconomic and geographical factors contributed to the higher infection and mortality rates for ethnic minority groups.

But it said a part of the excess risk remains unexplained for some groups.

In an oral statement on Thursday, women and equalities minister Kemi Badenoch will set out a number of new measures which the Government is taking to protect those at risk.

This includes a new £25 million community champions scheme being funded by the Ministry of Housing, Communities and Local Government (MHCLG), which will provide funding to existing communication strategies in the most impacted areas, as well as grassroots, voluntary and community groups who specialise in working with communities most at risk.

Work is also under way to make it mandatory for ethnicity to be recorded as part of the death certification process, in order to establish “a complete picture” of the impact of the virus on ethnic minorities.

Other steps the Government will take include updating the shielded patient list and establishing a series of roundtables over the coming months with faith leaders and other community representatives.

The report says the RDU has developed a plan to identify gaps in data, for example, the occupations of Covid-19 fatalities, by ethnicity, which was not available when PHE undertook its original analysis.

It said biological factors such as genetics are unlikely to explain the inequalities in ethnic groups, and that recent studies did not find any relationship between vitamin D and Covid-19, suggesting that lack of vitamin D for ethnic minorities cannot explain the disparities.

It found people from ethnic minority backgrounds tend to live in urban areas with high population density, where the spread of the virus may have been higher, while evidence showed there was a link between the prevalence of antibodies and household size, ranging from 4.7% in single occupancy households to 13% in homes with seven or more people.

They are also more likely to live in overcrowded households, large households, and in households with poor housing conditions, the report said.

It also found 1.4 million key workers were from ethnic minorities, making up 14% of all key workers and 20% of those in high-risk occupations.

About 34% of people who were critically ill with Covid-19 up to August 31 were from ethnic minority backgrounds, the report said.

Obesity is more strongly associated with death from coronavirus for ethnic minorities – mostly for South Asian and Afro Caribbean people – than it was for white people.

The Government Equalities Office (GEO) said the Government spent £4 million between March and July on messaging targeted at ethnic minority people, with key information translated into local community languages across all watchlist areas.

Ms Badenoch said: “We have invested in a strong package of measures to target messaging, develop the data we have available and make sure everyone is as safe as possible at home or in the workplace.

“Today’s report marks an important first step in our journey to understand and tackle the disproportionate impact of Covid.”

Dr Rohini Mathur, assistant professor of epidemiology at the London School of Hygiene and Tropical Medicine, said: “It is vital that we understand the key drivers of the health disparities caused by Covid-19 and set out evidence-based, efficient action to tackle them.”

Dr Mathur, who also sits on the Scientific Advisory Group for Emergencies’ (Sage) ethnicity sub group, added: “This report is a strong step on the path to doing this, highlighting important findings, dispelling damaging misinformation and presenting clear steps to address the impact of the virus on ethnic minority communities.”

The report comes after research by think tanks the Institute for Public Policy Research (IPPR) and Runnymede Trust estimated that at least 58,000 more deaths involving coronavirus could have occurred in England and Wales if white people faced the same risk as black communities.

Dr Parth Patel, IPPR research fellow and an A&E doctor during the first wave of the pandemic, said the measures announced by the Government were “not even close” to tackling the scale of inequality.

He said practical measures that could be taken include a triaged testing system, a winter funding package for local authorities, helping people self-isolate and ensuring everyone can use the NHS freely this winter.

“Failure to act quickly will lead to thousands of unnecessary deaths during this second wave – this is about public health as much as it’s about racial justice,” he said.

“The Government needs to stop prevaricating when it comes to people’s lives.”