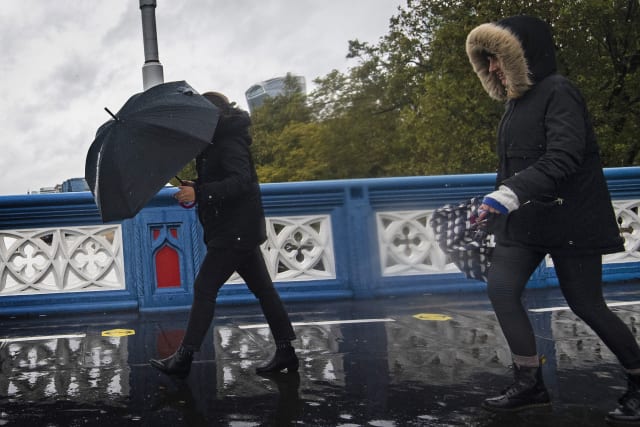 New projections from the weather and climate experts show that future downpours and summer heat is expected to exceed the extreme weather already seen in the UK.

The rise in extreme weather driven by climate change is increasing the challenges for taking care of people’s health and maintaining infrastructure and services, the experts warn.

The latest addition to the UK Climate Projections (UKCP) from the Met Office examine the rise in rare high temperature and high rainfall events, that may only occur on average once in 20 years or even less frequently.

Under a medium scenario for what will happen to the emissions that cause climate change, maximum summer extremes could rise to 37C in London by mid century and 31C in Edinburgh.

And more rain is likely in extreme one-day and five-day rainfall events, the Met Office said.

The modelling shows likely one-day rainfall total in winter in a one-in-50-year event rising by 2mm in London, Edinburgh, Belfast and Cardiff between 1950 and 2020 and could see another 1mm of rise by 2050.

Professor Jason Lowe, head of the UKCP programme for the Met Office, said: “Some of the most severe consequences of climate change will come from an increasing frequency and severity of extreme weather events.

“We know that on average the UK is projected to become hotter and drier in summer, and warmer and wetter in winter – this tells us a lot, but for those assessing climate change risk it’s important to better understand how extreme weather events are likely to change, too.”

Dr Simon Brown, one of the key scientists working on the project, added: “If you’re designing a flood-relief scheme or building a railway, for example, you can’t assume that the climate will remain the same because we know that it is already changing.

“The things you want to know will be how much heat or rainfall will my project have to cope with and that is what our projections will do.”

The UKCP projections help Government, organisations, engineers, professionals and other people understand more about how climate change is likely to affect the UK.