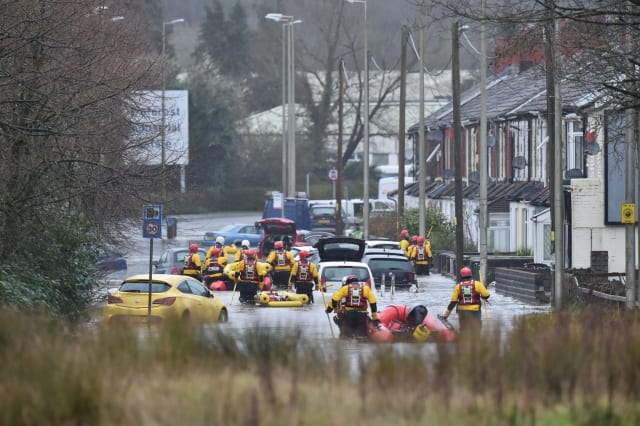 A review into the worst flooding to hit Wales in over 40 years has found that increased pressure on staff operating its flood warning service hampered its ability to issue alerts to residents.

Storms Ciara, Dennis, and Jorge devastated parts of the country in February, leading to more than 3,100 properties being flooded, 2,527 of them households, over the course of the month.

Average claims data from the insurance industry valued the flood damage to be around £81 million.

Widespread flooding in the Rhondda Cynon Taf (RCT) area of south Wales was the worst incident of flood damage seen in Wales since 1979.

Following Storm Dennis in the third week of February, residents in areas like Nantgarw said they had to be woken up by neighbours in the early hours of the morning, unaware their homes were filling with water and having been caught unaware of the risk the storm had posed.

The Met Office later confirmed that February 2020 would enter its record books as the wettest February on record and fifth wettest month since records began in 1862.

On Thursday, a review into the flooding by Welsh Government-sponsored body Natural Resources Wales (NRW), which issues and manages flood forecasts, found its operations had been stretched and hampered its ability to react to “rapidly escalating and unforeseen events on the ground”.

It also found 12 flood warnings were not issued when they should have been, and six were issued late.

The review said: “During Storm Dennis it was clear that the complex decision-making and judgment used to issue flood warnings during a very short timescale, and in the early hours of the morning, became increasingly challenging.

“The workload and pressure at this time was significant and, in the rapidly escalating events that occurred during that particular storm, some flood warnings were issued late (after the onset of flooding) or not issued at all.”

The report said the “extreme events” led to the level of NRW’s service “falling below what we aim to provide”.

“The flood warning service depends on the skills and expertise of the staff who run the service on a 24/7 duty rostered basis.

“The review has found that this capacity was severely stretched, and improvements are needed if we are to cope with this scale of event in the future.”

The report added that the severity of the flooding meant it was “unavoidable”, and that extreme weather events were likely to affect Wales again in future due to climate change.

“Therefore, we need to understand how to adapt the way we live and work in these locations.

“Many of our structures and systems worked well, protecting large numbers of communities and properties.

“However, the scale of these weather events was such that some flooding was unavoidable; significant flooding still occurred, resulting in trauma and considerable long-term impacts on individuals, businesses, families and communities.”

The report also found that its closing of flood gates, installation of demountable barriers and clearance of structures meant many areas were spared worse damage by the water.

It has set itself five key themes to address in future, including shortfalls in its flood warning service provision, and staffing capacity limitations including out of hours.

Following the review, Clare Pillman, chief executive of the organisation, said she believed February’s flooding was “unavoidable” due to the resources available, but that it must be used to “ignite the discussions around the investments needed”.

She told the PA news agency: “I think it was unavoidable in terms of the assets and resources we had at the time.

“But I do believe that flooding at that scale and that severity and that speed would always pose challenges.”

She added: “But I don’t think we can simply build our way out of trouble.

“The scale of the problem is too great.

“And if you build big flood defences in one area it just moves the problem to another.”

Ms Pillman said she welcomed a new Welsh Government strategy for flood management released earlier this week, which focuses on better communication of the threat posed in future and includes publishing online maps to identify flood sources and level of risk to communities in Wales.