Covid: How do regions move into and out of the top tier of restrictions? 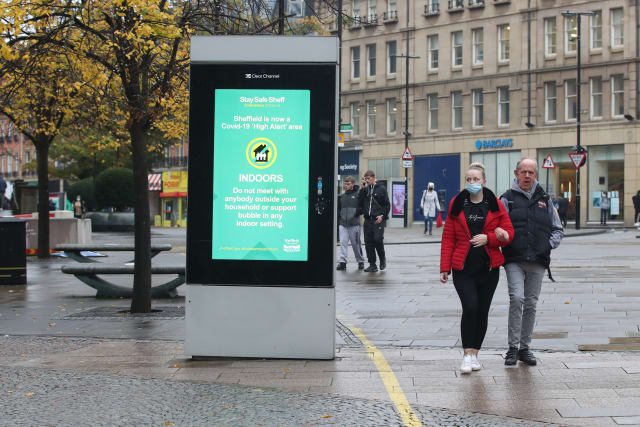 Sir Keir said that Tier 3 was a “gateway” to potentially months and months of “agony” from which there was no exit.

But Mr Johnson said he had made it absolutely clear that regions were only under the measures for 28 days before the restrictions were reviewed.

Here the PA news agency looks at what we know about how regions are placed into Tier 3 and how they get out.

– What are Tier 2 and Tier 3 restrictions?

Under the second tier – high alert – household mixing is banned indoors while the rule of six will continue to apply outdoors.

Tier 3 – very high alert – bans social mixing both indoors and in private gardens, while pubs and bars will be told to close unless they can operate as a restaurant.

Local leaders will help to determine whether other venues should be closed, such as gyms or casinos, in very high alert level areas.

– Why is Sir Keir concerned about the top tier?

At Prime Minister’s Question Sir Keir said the toughest tier of restrictions was “a gateway to weeks and weeks, more likely months and months, of agony from which there’s no likely exit”.

He said: “The widespread fear, Prime Minister, is that Tier 3 is the worst of all worlds. It brings significant economic harm without getting the virus sufficiently under control to exit Tier 3.”

Sir Keir asked whether an area could come out of the top tier if its reproduction number – the average number of people who will contract Covid-19 from an infected person – had not dropped below one.

Mr Johnson told the House of Commons that the third tier was only in place for 28 days before it was reviewed, and many areas in the top tier were already making progress.

He added that there were a number of measures, including the “R rate”, to be taken into consideration before a region could come out of the restrictions.

However, health minister Edward Argar said that areas will remain in Tier 2 and 3 “as long as necessary” to protect people and the NHS in the region.

– Is there a set of criteria for a region moving up or down a tier?

There is no published criteria on what factors lead an area to be moved from one tier to another.

But Dr Clare Gardiner, director general of the Joint Biosecurity Centre (JBC), said there was a “basket of indicators” which were looked at with the chief medical officer, who would then make recommendations to ministers.

Giving evidence to the Science and Technology and Health and Social Care committees on Wednesday, Dr Gardiner said the criteria were still under discussion but she was was keen for it to be published as soon as possible.

– Do we know what factors are considered?

Dr Gardiner outlined a range of indicators for a region moving up to Tier 3, including having a rate of more than 100-150 coronavirus cases a week per 100,000 population, case rates in the over 60s, having a positivity rate of more than 7.5% and the number of people being admitted to hospital.

But she said the same criteria could not be used to take an area out of the highest tier because there was very little chance they would meet it in the four-week review period.

She told the committees that if they set the target of reducing case rates to less than 100-150 a week per 100,000 population, then regions with really high rates would be “incredibly unlikely” to meet this.

Dr Gardiner said: “I think it would be important to see a stabilisation of case rates, ideally before coming out of a tier.”

– So how are the decisions going to be made?

Dr Gardiner said that the decision to move an area out of the top tier would come after discussions between public health officials and local leaders.

She added: “There’s a lot of professional judgment that needs to be brought to bear, looking at those key indicators and trying to understand if there is a stabilisation or slowing of growth so that NHS colleagues are feeling more comfortable about their ability to retain key services.”

– How long will it take to know if the tier system is working?

Dr Gardiner said it will take two to three weeks to establish whether tough top-tier coronavirus restrictions are working in a region.

She said that part of the lag came from the virus having a 10-day incubation period.

– What will happen if the restrictions do not work?

Professor John Edmunds, a member of the Government’s Scientific Advisory Group for Emergencies (Sage), said the “logical” conclusion of the tier system was high rates across the country.

Asked for his view on current Government measures and what the trajectory looked like in terms of the number of cases, deaths and pressure on the NHS, he replied “quite gloomy”.

He warned that the UK can expect tens of thousands of deaths from the second wave of coronavirus, which will peak in the North West probably in the next four to six weeks unless additional measures were brought in.

Prof Edmunds said there will be peaks around Christmas and New Year for other parts of the country of “very severe numbers” of cases throughout the UK and hundreds of deaths a day.