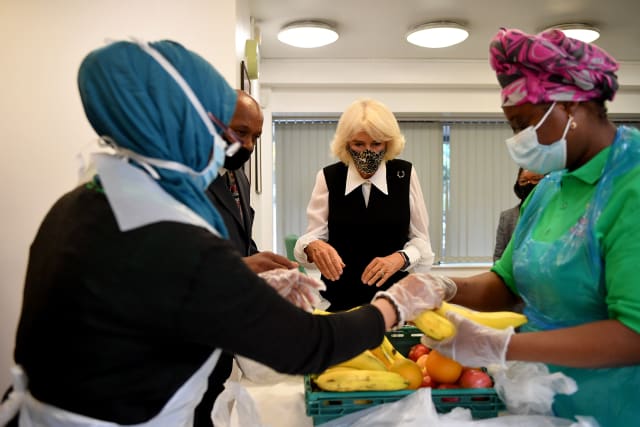 The Duchess of Cornwall has helped pack lunches, complete with a sweet treat from Clarence House, for African Caribbean pensioners at a day centre.

Camilla, wearing a striking leopard print face mask, took along a tray of chocolate brownies made by a chef at her official residence when she visited the Pepper Pot Centre in Ladbroke Grove, west London.

The duchess joined volunteers sending hot meals of Caribbean oxtail and chicken with vegetables to about 30 pensioners and joked she baked the chocolate squares herself.

Julie Mills, a local councillor and trustee of the centre, remarked: “I hear you made these yourself.”

Camilla joked: “Of course I did. Would I lie to you?”

Each chocolate brownie was individually wrapped in parchment, tied with string and labelled with a note, headed with Camilla’s C cypher, saying the brownie was from the duchess.

The Pepper Pot Centre, which has been delivering meals to pensioners during the Covid-19 crisis, was set up nearly 40 years ago as a safe haven for the Windrush generation by the late racial discrimination activist Pansy Jeffrey.

It was founded to combat isolation, depression, discrimination and loneliness among the growing generation of African Caribbean older people.

Camilla sympathised with some of the elderly members who told her they were missing their friends, as she chatted with them on Zoom in the centre’s IT suite.

Norma Seal McConnie, an 80-year-old great-grandmother who came to Britain from Barbados in 1958 and trained as a nurse, told the duchess. “It’s very sad because I (normally) come into the centre five days a week. I miss my friends.”

Camilla replied: “I can well believe that. It must be a big gap in your life.”

At the start of the video call, Camilla had been speaking for a few seconds with no response from the pensioners when a royal aide intervened, saying: “Sorry Ma’am, you’re on mute. I’ll just unmute you.”

The duchess, who has been keeping in touch with her family using the House Party app and carrying out royal duties via Zoom, told one pensioner: “As you get older it’s more difficult to learn all these technological things, isn’t it?”

Camilla told the volunteers, who have also been holding remote internet classes for over 50s since the national lockdown in March, that they were “doing a great job”.

She was shown around by Mrs Jeffrey’s son Howard, who is now chairman of the centre.

“They miss the bingo and Bible studies most,” he told Camilla.

The Queen has visited the Pepper Pot Centre twice – first to open the site in 1981 and in 2006 to mark its 25th anniversary, when she toured the hair salon and art room.

The name Pepper Pot comes from an Amerindian dish, made popular in Guyana, which Mrs Jeffrey served to the small group of pensioners she first invited to lunch at the Citizens Advice Bureau where she was working.

The centre sits underneath the busy A40 Westway dual carriageway, one of the main routes into London from the west.