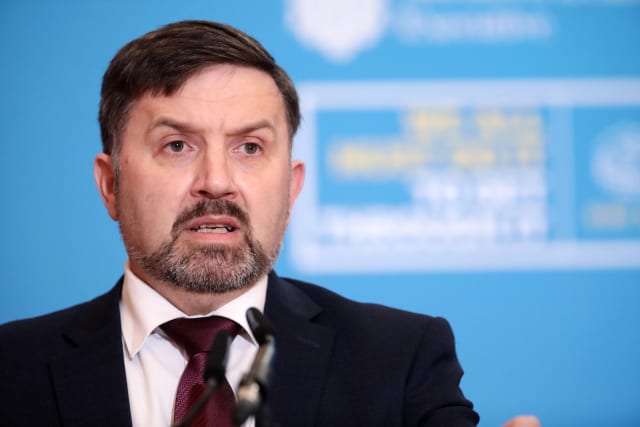 Northern Ireland’s health minister and chief medical officer have rejected the suggestion the spread of Covid-19 has any link to political affiliation.

Robin Swann and Dr Michael McBride’s comments came amid the continuing fall-out from Agriculture minister Edwin Poots’ claim that the virus was more rife in nationalist areas than unionist areas by a factor of six to one.

Mr Poots suggested coronavirus had increased among nationalists at a higher rate because behaviours had been influenced by “poor political leadership” shown by Sinn Fein leaders when they attended June’s funeral of IRA veteran Bobby Storey in Belfast in apparent contravention of Stormont’s rules on mass gatherings.

The latest interventions in the furore came as Stormont’s chief scientific adviser professor Ian Young highlighted a “positive sign” that the increase in Covid-19 infections in the region was starting to slow.

Prof Young also said more of the scientific evidence that informed the executive’s decision making was to be made available to the public in an online resource.

In another development on Tuesday, the BBC reported that more than 1,700 healthcare staff were isolating across three of Northern Ireland’s six health trusts.

“Something we don’t do is ask anybody who’s contracted Covid-19 their political or religious affiliation,” he said.

Mr Swann added: “Our nursing staff, our doctors, our hospital porters don’t care what religion or what political affiliation their patients have, nor does Covid.

“And I think that’s the critical point, we need to get through to anyone listening that this virus is no respecter of political persuasion, religious belief or economic or social background as well.

Dr McBride made similar points during a separate media briefing on Tuesday afternoon.

“Certainly at no stage would we have either publicly or privately suggested that there’s a link between the transmission rates of Covid-19 and people’s political affiliation or religion,” he said.

“There is no such evidence, we don’t have that evidence and our approach throughout all this has been guided by the evidence.”

He added: “I know of no such evidence and I’m not sure of the basis of those comments.”

Dr McBride also moved to dispel speculation that events linked to the GAA had a disproportionate impact on soaring infection numbers in recent weeks.

Addressing the same briefing, Prof Young said a number of identifiable clusters had been linked to sporting clubs and events, but he stressed those cases involved all the main sporting codes in the region.

Mr Poots has insisted that his comments were not sectarian, telling Tuesday’s Irish News that could not be the case because most Sinn Fein leaders “don’t attend the Catholic church on a regular basis”.

He said his remarks were instead a political statement about “poor political leadership”.

In the Assembly on Tuesday, Mr Poots’ party and constituency colleague Paul Givan defended his stance, insisting that he had not introduced the issue of religion into the debate.

“Those that make the accusations about other colleagues are blinded by their own catastrophic failures when it comes to how this issue has been managed,” said the Lagan Valley MLA.

“The funeral issue (has been) well documented, (they have) an inability to recognise that in areas the rate has been higher.

“And that’s what my colleague (Mr Poots) outlined, the rate has been higher in those areas where the party opposite (Sinn Fein) has greater political support than other areas.

“No mention (made by Mr Poots) anywhere of religion.”

There were three further Covid-19 linked deaths announced by the Department of Health on Tuesday and 913 new cases of the virus.

The toll recorded by the department now stands at 624.

There have been 28,953 confirmed cases of the virus since the outbreak began, 6,850 in the seven days since Tuesday.

There are currently 286 patients with Covid-19 being treated in hospital, with 29 in intensive care.

Prof Young said there was evidence that limits on household restrictions introduced last month had worked.

“What we are beginning to see is a slowing of the rate of increase, which is a positive sign, and most likely reflects the household restrictions, which were put in place some time ago, and possibly the very beginning of the impact of more recent restrictions,” he said.

He said there was also evidence of a “fairly steady decline” of infection rates in the Derry City and Strabane Council area, Northern Ireland’s current Covid hotspot.

Prof Young attributed that to the localised restrictions that had been introduced in the area a number of weeks ago.