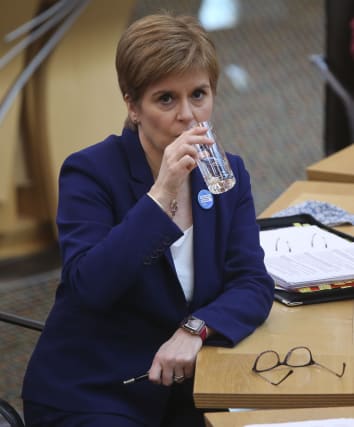 Nicola Sturgeon is due to give an update on Scotland's temporary coronavirus restrictions later on Wednesday following a meeting of the Scottish Cabinet.

The measures were brought in on October 9 to stem a rise in Covid-19 cases and are due to end on Sunday.

However, a decision could be made to extend these until the implementation of a tiered framework.

At the First Minister's daily coronavirus briefing on Tuesday, it was announced a new tiered system of restrictions will come into force in Scotland on Monday November 2 – if approved at Holyrood next week.

Under the temporary restrictions, bars and licensed restaurants in five health board areas – Greater Glasgow and Clyde, Lanarkshire, Ayrshire and Arran, Lothian and Forth Valley – have been forced to close for all but takeaways.

The First Minister urged eligible businesses to apply for a new fund to support those impacted by the measures, and said she hopes a "reasonable degree of cross-party consensus" will be reached before the framework is debated.

But after her meeting with opposition leaders, Douglas Ross reiterated calls for a minimum one-week period to allow businesses to prepare for any change in guidance.

The Scottish Conservatives leader said: "While we will scrutinise the proposals closely when they are published, we are concerned about any proposed extension to the current temporary restrictions with no consultation and before businesses have seen a penny of the funding that they were promised.

"The need for any continuing restrictions is of course deeply regrettable, but we are at risk of seeing the SNP repeat the same mistakes of two weeks ago, with businesses given very little time to adapt to changing conditions.

"Many pubs and restaurants will have expected to reopen on Monday and that is now in serious doubt.

"The SNP must have known for some time that they may have had to extend the restrictions over this interim period, so should have confirmed this sooner.

"Scottish businesses are being let down again by confusing guidance and rushed timelines."