Postal workers to pick up parcels from British doorsteps 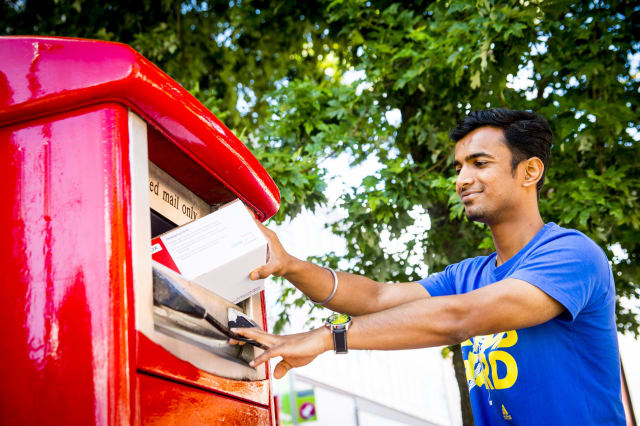 Postmen and women will pick up parcels from the doorsteps of people's homes across the UK, as the company tries to grab a bigger share of the booming parcel market.

Households that have packages they need to send can now do so without leaving home for a 72p charge per parcel, Royal Mail said.

The parcels can weigh up to 20kg and can be a little over twice the size of most airplane hand luggage (61cm by 46cm by 46cm).

It was hailed by the postal service as "one of the biggest changes to the daily delivery since the launch of the post box in 1852".

The company has been testing its system in the west of England, but will now roll it out nationwide, it said on Wednesday.

"Royal Mail Parcel Collect is a fantastic step forward for all of our customers. It makes it easier to use our services than ever before," said Royal Mail chief commercial officer Nick Landon.

Claire Roebuck-Sacks, a customer from Bristol who has used the service during testing, said: "I used Royal Mail's Parcel Collect during the initial roll-out of the service in Bristol.

"The service was really easy to use, and it was a convenient way to send a gift to my aunt, particularly as I have a new baby, so time is precious."

Customers will be able to get their parcels collected every day apart from Sundays.

Pre-paid return packages can be collected for 60p per item.

Returns have become an increasingly important market for the postal system in recent years, as online shoppers want the chance to change the items they bought.

It has spawned a new industry of companies to take charge of the returns process.

Millionaire businessman Lloyd Dorfman has set up Doddle, a company that partners with local shops to simplify returns, but also offers click-and-collect services.

Royal Mail has been forced to rely increasingly on parcels, as letters drop in importance with the advent of email. Since 2004 the number of letters it delivers has halved, even before the pandemic.

This year has been particularly harsh. In the three months to the end of June the company delivered 788 million fewer letters than the same period the year before, down 33%.

The reduction was sped up by Covid-19, but even before the pandemic hit, Royal Mail was expecting a drop of up to 8% in letter volumes during the 12 months to the end of March.

The company has already tried to maximise its presence in the booming parcel market, launching parcel post boxes last year. The first parcel post service was launched in in 1883.