Officers take on 24-hour ‘Ratana Rowathon’ in honour of colleague 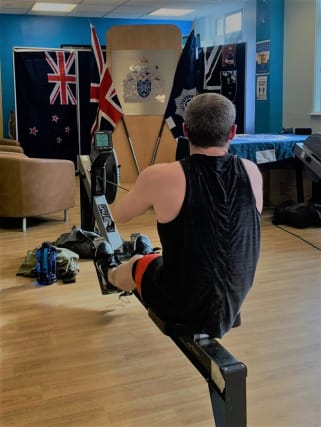 A response officer has kicked off a 24-hour ‘rowathon’ in honour of colleague Sergeant Matt Ratana, who was killed in the line of duty in September.

Pc Dean Cook, 32, decided to organise the challenge as the last time he saw Sgt Ratana was three days before his death, when the 54-year-old was training on a rowing machine.

In total, around 40 officers from the Metropolitan Police will take part in the attempt, which is due to finish at 7am on Wednesday, with the machine cleaned in between efforts and social distancing enforced.

Pc Cook kicked things off with an hour-long stint on the rowing machine at 7am on Tuesday, with others taking 30-minute slots afterwards.

“Officers in #Brixton are fundraising in memory of Sgt Matt Ratana by taking part in a ‘24 Hour Ratana Rowathon’,” the Lambeth Police Twitter account posted.

“Since 7am this morning, officers from #Lambeth and #Southwark have been rowing in relay in tribute to a much loved and deeply missed colleague.”

Sgt Ratana was shot at Croydon Custody Centre in south London in the early hours of Friday September 25 as he prepared to search a handcuffed suspect.

Donations will go towards a JustGiving page set up in Sgt Ratana’s memory, with funds set to be split between his partner, son and causes he cared about.