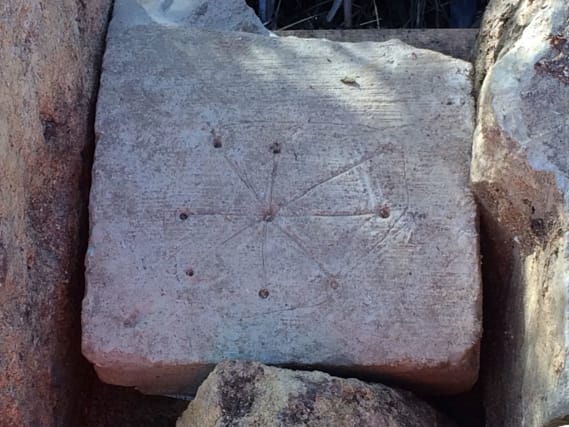 Medieval graffiti associated with repelling evil spirits has been discovered by HS2 archaeologists.

A series of lines radiating from a drilled hole were discovered on two stones at the remains of a church in Buckinghamshire.

Historians believe such markings are witches’ marks, created to ward off evil spirits by trapping them in an endless line or maze.

They can also be interpreted as early sun dials.

The location of one of the stones at the medieval church of St Mary’s, Stoke Mandeville, suggests the markings could have been created for protection.

The route of HS2 will go through the site of the 12th century church, which was abandoned in 1866 when a new church was built closer to the village.

Work by archaeologists to dismantle and excavate the church will continue into next year, and include the removal and reburial of bodies in graves.

HS2 Ltd lead archaeologist Michael Court said: “The archaeology work being undertaken as part of the HS2 project is allowing us to reveal years of heritage and British history and share it with the world.

“Discoveries such as these unusual markings have opened up discussions as to their purpose and usage, offering a fascinating insight into the past.”