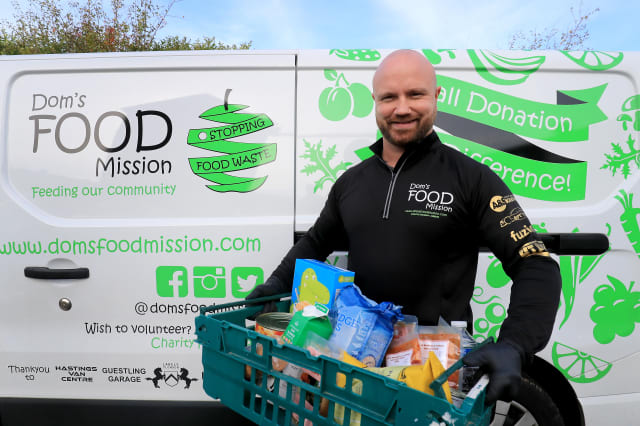 A food project in one of the most deprived areas of the country has been recognised with a National Lottery Award.

Known as a sunny seaside resort with a rich and storied history, Hastings also has high levels of childhood poverty.

In 2015 Dom Warren and his wife Alexandria decided to do something about it, and five years later the results are incredible.

On Tuesday he was presented with an award for his amazing efforts to feed his community.

His venture Dom’s Food Mission has been announced as the winner in the environment category of the 2020 National Lottery Awards.

Mr Warren, 35, told the PA news agency: “Children shouldn’t not be eating and I didn’t really understand that the breakfast clubs weren’t free to every child… so many are going without.

“I knew we could do something.”

They decided to put together food parcels for people who need them, made up of items that would normally have gone to waste.

“I knew that thousands and millions of tonnes every day goes in the bin, and me and my wife would not be able to afford the thousands of meals going out, so I knew that that was what was needed.”

Born on a notepad in a car park in 2015, Dom’s Food Mission has grown to the point of delivering 8,000 food parcels a week during the Covid-19 lockdown.

The couple initially started a Facebook group, asking people to donate food to boost the stocks in Hastings, not knowing what impact they would make.

In the first week, they collected enough to feed 160 people.

Word soon spread and, before they knew it, they had established partnerships with businesses like M&S, Greggs, and Asda.

During lockdown Dom’s Food Mission has also stepped up its private home delivery service to ensure that those who are isolating are not missing out.

Mr Warren said: “I get calls from families saying ‘we wouldn’t have eaten if it wasn’t for you’.

“That Alexandria and I were able to take the mission full time with National Lottery support and help so many people makes me feel really proud.”

As well as feeding the less fortunate, the project also prevents 35,000 tonnes of food from going to landfill every month.

Hastings is one of the most deprived areas of the country, with over 26% of children living in income-deprived households, according to the English indices of deprivation 2019 report.

Mr Warren hopes that the award will raise awareness of what his project is doing and show that it can be replicated around the country.

Former Strictly star and This Morning resident doctor, Dr Ranj went to visit him in Hastings on Tuesday to present the award.

He told the PA news agency: “I have been on the edge of tears and that’s not even an exaggeration.

“I didn’t expect before I got here to be hit with a wave of emotion about how incredible this project is.

Dom and Alexandria Warren have been named winners of the environment category at the 2020 National Lottery Awards, the annual search for the UK’s favourite National Lottery funded people and projects.

The awards celebrate the inspirational individuals who do extraordinary things with the help of National Lottery funding.

Since the outbreak of Covid-19, The National Lottery has distributed support packages of up to £600 million across arts, sports, heritage, education and the environment.