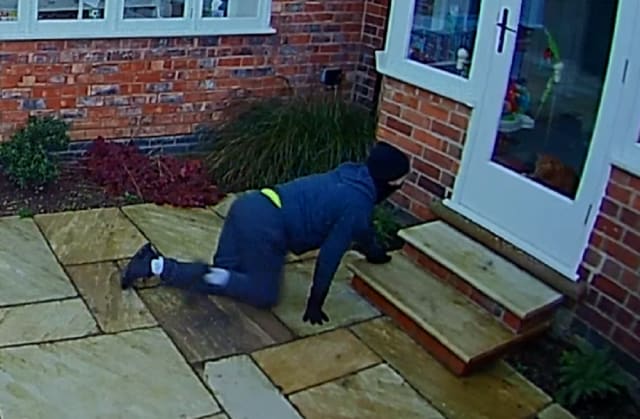 A burglar was arrested by police after the homeowners watched him prowl outside their house before coming face to face with their pet cat.

CCTV footage captured the bizarre moment Mark Lawson was caught on all fours around the property on Priory Road in West Bridgford, Nottinghamshire, on March 16.

After making his way around the rear of the property, Lawson then stared through the window at the family's cat, who could be seen looking at him through the glass door.

The homeowners were watching the 42-year-old's movements through a mobile phone app and alerted police.

Lawson eventually fled the scene after an alarm sounded but was arrested by officers nearby, Nottinghamshire Police said.

Appearing at Nottingham Crown Court on October 13, Lawson, of Eugene Gardens, The Meadows, was sentenced to 12 months in prison suspended for two years after previously admitting a charge of attempted burglary.

He was also sentenced to a total of six months in prison, suspended for two years, for three counts of handling stolen goods, police said.

Detective Constable Christopher Copley said: "Lawson had every intention of breaking in the home of a family as they slept upstairs and was foiled only by modern technology.

"The swift and calm actions of the homeowner, who was understandably concerned for the safety of his family, allowed us to catch up with this offender almost immediately.

"A response team from West Bridgford quickly attended the location, arrested Lawson and did an excellent job of securing evidence.

"I am pleased he has now been punished and hope he uses this opportunity to change his future behaviour.

"This case should also serve as a reminder of the potential benefits of modern CCTV phone apps, which can be used to alert residents to everyone who approaches their home."