No 10: ‘No basis’ to resume trade talks with EU unless Brussels alters position 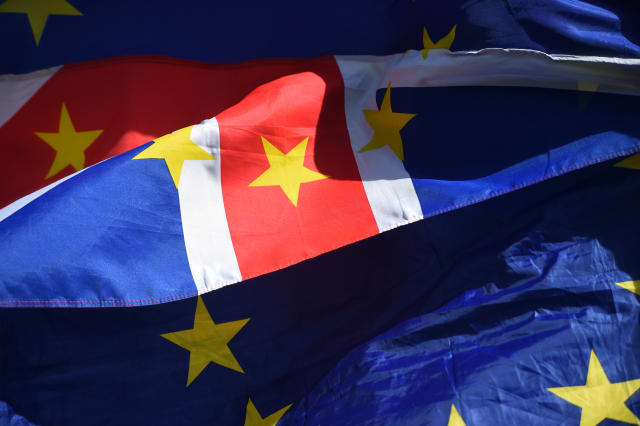 Trade talks between the UK and European Union remain in limbo despite an offer from Michel Barnier to "intensify" negotiations.

Mr Barnier, the EU's negotiator, spoke to Boris Johnson's Europe adviser Lord Frost on Monday in an effort to revive the process.

But Downing Street said that unless there is a "fundamental change of approach" from Brussels, "there is no basis to resume talks".

The negotiations stalled after a meeting of leaders from the 27 European Union member states last week failed to produce a breakthrough.

Following his discussion with Lord Frost, Mr Barnier said the EU was prepared to continue talks across all subjects in the negotiations.

Crucially, he indicated the EU was prepared to discuss "legal texts" for a deal, something the UK has been pushing for.

A Number 10 spokesman said there had been a "constructive discussion" and the UK and EU teams would remain in close touch, but stressed that there was no hope of progress unless Brussels dramatically altered its position.

"The UK has noted the EU's proposal to genuinely intensify talks, which is what would be expected at this stage in a negotiation," the spokesman said.

"However, the UK continues to believe there is no basis to resume talks unless there is a fundamental change of approach from the EU.

"This means an EU approach consistent with trying to find an agreement between sovereign equals and with acceptance that movement needs to come from the EU side as well as the UK."

In the Commons, Cabinet Office Minister Michael Gove said it was "almost incredible" that the EU had so far refused to discuss legal texts but suggested the statement from Mr Barnier demonstrated the UK's "firmness" was producing results.

The atmosphere between the UK and EU soured after the European Council summit drew back from a commitment to hold round-the-clock talks in an attempt to get an agreement in place before the transition period expires at the end of the year.

Mr Gove told MPs: "The conclusions of that council reaffirmed the EU's original negotiating mandate, they dropped a reference to intensive talks that has been in the draft and they declared that all, all future moves in this negotiation had to be made by the UK."

He added: "There's no point in negotiations proceeding as long as the EU sticks with this position."

Mr Gove acknowledged that leaving the transition period without a trade deal could cause some difficulties.

"We recognise that there will be some turbulence, but we've not come so far to falter now when we are so close to reclaiming our sovereignty."

Downing Street stressed that if no deal is in place by the end of the year, when the current transition arrangements end, the UK will not return to the negotiating table in 2021.

EU leaders must also be committed to a resolution that "respects UK sovereignty and independence".

"If not, we will end the transition period on Australian terms," the spokesman said.

Business Secretary Alok Sharma admitted that the difference between a no-trade deal outcome and "Australian terms" is a "question of semantics".

The major stumbling blocks remain access for EU boats to UK fishing grounds and the "level playing field" to ensure fair competition – including any state subsidies that the Government might seek to give firms.

The developments came as the Government launched a "time is running out" campaign urging businesses to get ready for the end of the transition period on December 31, regardless of whether a trade deal is in place.

Confederation of British Industry deputy director-general Josh Hardie warned of a "hat-trick of unprecedented challenges" from the first wave of coronavirus, its resurgence and "uncertainty over the UK's trading relationship with the EU".

Meanwhile the UK Internal Market Bill will face a challenge in the House of Lords, with opponents including senior Church of England bishops critical of measures allowing the Government to break international law and tear up elements of the Brexit divorce deal.

"We consider the Ukim Bill to be vital," the Prime Minister's official spokesman said in a message to peers.

"It was passed with the support of the House of Commons and we believe it is a necessary legal safety net to protect the integrity of the UK's internal market."

European Commission vice-president Maros Sefcovic, who held talks in London with Mr Gove about the Withdrawal Agreement, said the legislation was a "breach of trust" which had led to Brussels beginning legal action.

But he added: "This morning's discussions show that if we put our minds into it, I believe we can solve the issues in the framework of the Joint Committee."