Greater Manchester’s intensive care capacity could be overwhelmed, says No 10 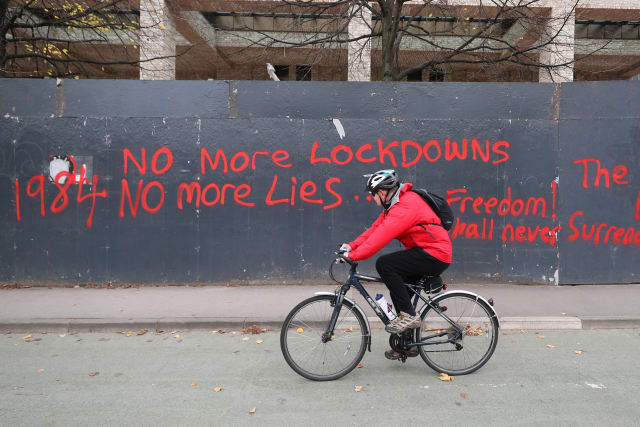 Greater Manchester’s intensive care capacity could be overwhelmed by Covid-19 within weeks, Downing Street has insisted, as it increased pressure on the region to accept Tier 3 coronavirus restrictions.

Projections produced by the Government suggested Manchester’s hospitals risked being overwhelmed by November 12.

“Hospital admissions in Greater Manchester are doubling every nine days.”

Currently the number of Covid-19 patients in intensive care is around 40% of that seen at the peak of the first wave.

But, assuming a 14-day doubling time – the “best case” according to the SPI-M modelling group – all free intensive care capacity would be used by October 28 and would pass the peak of the first wave by November 2.

“If at all possible, we do want to engage constructively with Greater Manchester and agree on a way forward,” the spokesman said.

But if agreement cannot be reached, the Government will need to intervene “in order to protect hospitals and save the lives of residents”.

The comments came after ministers insisted Greater Manchester’s coronavirus status will end within days – either with a deal which could see tens of millions of pounds in extra funding for the region or with the imposition of harsh restrictions from Westminster.

Greater Manchester’s leaders have resisted moving into Tier 3, which would see pubs and bars ordered to close as part of a package of strict measures – but Communities Secretary Robert Jenrick said it was time for “decisive action”.

He said a range of support had been offered to the region, including “more resources for local councils”, greater involvement in contact tracing and the potential use of the military to assist local authorities.

Greater Manchester’s mayor, Andy Burnham, has pressed for a Commons vote to break the “impasse”.

Senior Conservatives, including the influential chairman of the 1922 committee, Sir Graham Brady, have backed the Greater Manchester mayor in resisting Tier 3 for the region.

Mr Burnham called for MPs to help workers and businesses hit with the harshest restrictions by having an urgent debate this week, warning “this is not just a Greater Manchester issue”.

Mr Jenrick said there had been “productive” negotiations with Greater Manchester, but Monday’s talks would be the “final discussions”.

“We do now need to draw these conversations to a conclusion and to take decisive action,” Mr Jenrick told BBC Radio 4’s Today programme.

“We have set out the action that we think is appropriate but we are also willing to continue, and have final discussions, with council leaders and the mayor in Greater Manchester today to see if we can reach an amicable agreement.”

Liverpool City Region received a £44 million package as part of its Tier 3 measures, but Greater Manchester wants more extensive support – including a furlough scheme paying 80% of wages for affected workers.

Oldham’s council leader, Sean Fielding, one of the local authority chiefs in Greater Manchester, said the row was not just about money but whether being placed in the “very high” alert category would actually have an impact on the number of coronavirus cases.

The Labour politician told Today: “This is about doing the right thing to bring the virus back under control and relieve pressure on the NHS.

“But if the Government does want to impose measures on Greater Manchester that are not with the support of their scientific advisers, then we will not allow our residents and businesses to be left financially worse off by the imposition of these untested measures.”

Treasury sources said Chancellor Rishi Sunak would not get in the way of a deal, but said he would not cave in to Mr Burnham’s demand for a return to the 80% furlough scheme for people whose workplaces are forced to close.

Mr Burnham said whether a deal can be reached is “not about the size of the cheque”.

He told Sky News: “It’s about protecting low-paid workers, people who are self-employed, supporting businesses and preventing them from collapsing. That’s what this is about.

“We’ve always said we would put people’s health first, and we will do that. But health is about more than controlling the virus – people’s mental health, I think, is now pretty low given that we’ve been under restrictions here for three months already.”

Mr Burnham will be under renewed pressure to accept a lockdown after the Guardian reported a leaked NHS document revealed Greater Manchester is set to run out of beds to treat those seriously ill with Covid-19 and that some of the region’s 12 hospitals are already full.

Mr Jenrick told Sky News: “The number of cases is rising and the pressure on some of the hospitals in Greater Manchester is there for all to see.”

Mr Burnham turned to Westminster to help break the deadlock, writing to party leaders to warn that “most places” will end up in Tier 3 at some point before a vaccine is rolled out.

He said “clear national entitlements” similar to during the first lockdown are essential to create the “sense of fairness” to ensure compliance with new restrictions.

The Welsh Government, which will on Monday announce a decision on whether to impose a short nationwide lockdown known as a circuit-breaker, called on the Government to give a more comprehensive package of support.

And business leaders also demanded help from the Treasury for firms in England forced to close in Tier 3, as well as those in Tier 2 which face “dramatically” hampered finances.

The British Chambers of Commerce told the Prime Minister that any new lockdown restrictions must come with “truly commensurate” financial support or risk “catastrophic economic consequences”.

A further 16,982 lab-confirmed coronavirus cases in the UK were announced on Sunday and an extra 67 deaths of people who had tested positive in the past 28 days, according to Government figures, which put the total at 43,646.