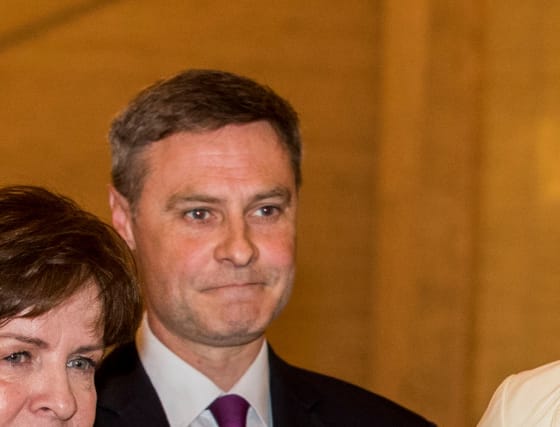 A DUP Assembly member has branded some of the new coronavirus restrictions introduced by the Stormont executive a “shame and disgrace”.

Paul Frew asked who was going to “protect the people” from the decisions being made by an administration his party jointly leads.

The North Antrim member’s comments come in the wake of DUP minister Edwin Poots’ criticism of the current four-week Covid-19 circuit-break, a series of measures all the five executive parties, including the DUP, agreed to last week.

Mr Poots has also faced calls to apologise after claiming that Covid-19 infection rates were higher in nationalist areas than unionist areas.

There were a further six Covid-19 linked deaths and 820 new cases of the virus reported by the Department of Health on Monday.

The four-week period of intensified restrictions has forced the closure of hospitality businesses, with the exception of takeaways and deliveries.

Schools have also closed for two weeks after the Halloween mid-term break was extended by a further week.

While many retail outlets and service providers can keep trading, those involved in close contact businesses, such as hairdressers and beauticians, have been told to close.

During an Assembly debate on the executive’s finances, Mr Frew claimed there was “no rhyme and no reason” as to why businesses that had put in place infection control measures were being told to close.

“The best way to support business in this time is to allow them to trade safely,” he said.

“The health minister (Robin Swann) talks in Biblical terms at the start of this crisis.

“Let me talk in Biblical terms, Mr Speaker, it is a God-given right for a person to endeavour to earn a living to provide for his or her family.

“And the executive have removed that right from these people without having any idea of the support mechanisms going to be in place.”

Mr Frew gave the example of a hairdresser he was aware of that had 18 employees, none of whom knew if they would have a job to go back to.

“That is a sad state of affairs, it should not be,” he said.

“Well, who’s here to protect the people from the very executive who are making these decisions.

“Because I see no rhyme and no reason why you would close businesses down that have put in place measures to safeguard staff and custom.

“And I have yet to see any evidence to suggest that those businesses were the places where the disease was contracted.

“It is an absolute shame and disgrace that the executive can make a decision like that.”

Earlier, senior Sinn Fein MLA John O’Dowd called on Mr Poots to apologise for his comments on the breakdown of infection rates.

Mr Poots had linked the issue to alleged breaches of coronavirus rules by Sinn Fein members at the funeral of IRA veteran Bobby Storey in Belfast in June, suggesting that had set an example for supporters of the party.

Mr Poots told UTV: “A lot of this started shortly after the Bobby Storey funeral.

“A lot of the problems started after that event and people in that community saw the breaking of the rules that is why there is a difference between nationalist areas and unionist areas and the difference is around six to one.”

He added: “His comments about the breakdown of the council areas and his hint this is a Catholic problem is an absolute disgrace, comments that he should withdraw and comments he should apologise for.”