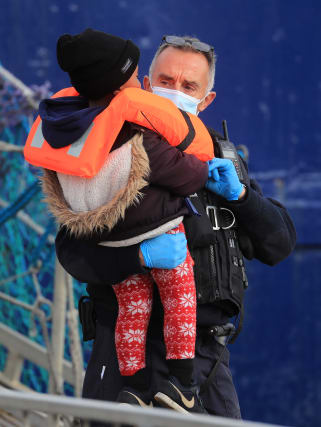 A small child is among dozens more people who have crossed to the UK on Monday, the day after a migrant was found dead on a French beach.

The young migrant was carried ashore by a Border Force official after being brought into Dover harbour.

She was among several groups of people who were seen arriving at the Kent port after crossing to the UK on small boats.

Wind speeds in the English Channel, calm over the weekend, are increasing again on Monday, making the crossing even more treacherous.

More than 200 people navigated the 27-mile stretch of sea to reach the UK on Saturday and Sunday, while French authorities prevented 370 from crossing.

At least 50 people were seen being brought into Dover on Monday aboard patrol vessels and by the RNLI.

One group was seen wrapped in white blankets and wearing life jackets as they arrived aboard a black Border Force rib boat.

They were escorted ashore where they will be medically assessed before being moved on.

Border Force and French patrols remain active in the Channel on Monday along with the RNLI.

Recent bad weather has rendered crossings nigh-on impossible, with Saturday’s 170 arrivals in Dover the most since September 22.

The perils of crossing the world’s busiest shipping lane were laid bare on Sunday morning, when the body of a migrant was tragically found on the French coast.

The man was discovered wearing a life jacket on a beach near Sangatte outside Calais after trying to cross the Channel, authorities said.

It brings the number of people who have died while making the dangerous journey since 2018 to six.